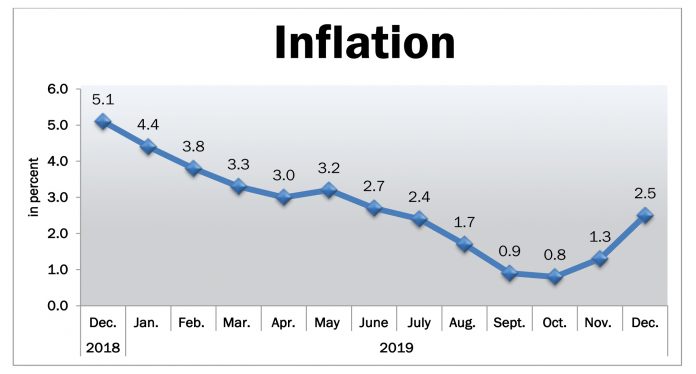 Likewise, the annual change of the transport index picked up by 2.2 percent during the month, from 2.4 percent annual decline in November 2019.

Higher annual increases were also noticed in the indices of alcoholic beverages and tobacco at 18.4 percent; housing, water, electricity, gas, and other fuels, 1.9 percent; and furnishing, household equipment and routine maintenance of the house, 3.1 percent.

But despite December’s uptick, inflation for the whole year averaged at 2.5 percent, at the lower end of the Bangko Sentral’s full-year target range of between 2 and 4 percent.

Benjamin Diokno, BSP Governor, said the latest inflation outturn is “consistent with the BSP’s prevailing assessment that inflation is expected to approach the midpoint of the target range in 2020 and 2021.”

BSP has also set the same target range for this year and next year.

“The risks to the inflation outlook are on the upside for 2020, but are tilted to the downside in 2021. The volatility in global oil prices and the potential impact of the African swine fever (ASF) outbreak are the main upside risks to inflation. Meanwhile, the impact of global trade and policy uncertainty as well as geopolitical tensions continue to be the main downside risks to inflation,” Diokno, in a statement, said.

Ernesto Pernia, Socioeconomic Planning Secretary, said the country ended last year with steady inflation “but the government must remain vigilant and proactive in managing the impact of potential sources of price pressures this year such as typhoons, continuing presence of ASF om the country, and the heightened conflict in the Middle East.”

Pernia stressed the recovery and rehabilitation plans for the typhoon-affected areas “must be immediately implemented and the production support programs for the affected farmers and fisherfolk must be fast-tracked.”

“Over the medium to long-term, the agriculture, forestry, and fisheries sector must increasingly adopt climate and disaster-resilient technologies and best practices. Climate and disaster risks should also be considered in the program and project designs in the sector,” Pernia added.

He also mentioned other priority areas such as assisting farmers to shift to high-value, short-maturing, and high-yielding crops; and sustaining biosecurity measures and procedures until the ASF is fully eradicated. This will bring back confidence of consumers in pork products.

Pernia also cautioned that the escalating tension in the Middle East may disrupt global oil supply which could lead to a surge in the prices of petroleum products and overall inflation.

Pernia further said that in the short-term, demand management and alternative sources of petroleum products should be explored, and over the medium to long-term, shifting away from fossil fuel and import dependence should be encouraged.

Nicholas Antonio Mapa, Senior Economist of ING Manila, the BSP was successful in keeping price gains in-check for the most of 2019 but “recent adverse weather conditions may have caused food prices to jump higher to close out the year with the food component showing a 1.7 percent increase in prices from no gain in November.”

“We expect inflation to edge higher in 2020 as reverse base effects kick in while the scheduled excise tax of fuel products take effect sometime in early 2020.  This moves in-line with our expectation for inflation to “bounce then settle” with headline inflation rising back to the 3 percent handle and remain stable for the rest of 2020.  Factoring the reverse base effects, we expect inflation to average 3.2 percent and as high as 3.4 percent should oil prices edge higher due to possible supply side disruptions,” Mapa said.

Mapa said the higher inflation in December “should keep the BSP on notice as they gauge price developments going into 2020.”

“The recent escalation in tension between the US and Iran may exert additional inflationary pressure on the headline print with global crude oil prices rising at a time when excise taxes are levied on fuel products in January 2020.  Despite these developments, BSP Governor Diokno was quick to downplay a possible upside breach although he did note that risks to the inflation outlook are on the “upside”.  We continue to believe that the BSP will have the scope to ease monetary policy further in 2020 with the first rate cut slated for the February meeting.  The Peso may enjoy some short term strength with some market analysts pulling back expectations for a central bank rate cut given the upside surprise to inflation,” Mapa said.

At its meeting on monetary policy stance last month, the Monetary Board decided to maintain the interest rate on the BSP’s overnight reverse repurchase (RRP) facility at 4.0 percent. Accordingly, the interest rates on the overnight deposit and lending facilities were kept unchanged at 3.5 percent and 4.5 percent.

The Monetary Board’s decision was based on its assessment of a benign inflation environment for the duration of the policy horizon, or six weeks.

The next meeting will be on Feb. 6.

Prices of consumer items in areas outside NCR, likewise, accelerated further by 2.4 percent in December 2019. In the previous month, inflation in AONCR was registered at 1.2 percent and in December 2018, 5.3 percent.

All other regions in AONCR registered higher annual mark-ups during the period.

The highest inflation among the regions in AONCR was seen in Region V (Bicol) at 3.3 percent, while the lowest was observed in Bangsamoro Autonomous Region in Muslim Mindanao (BARMM) at 0.8 percent.

Drilon to NEA: Remove fallen posts or else….