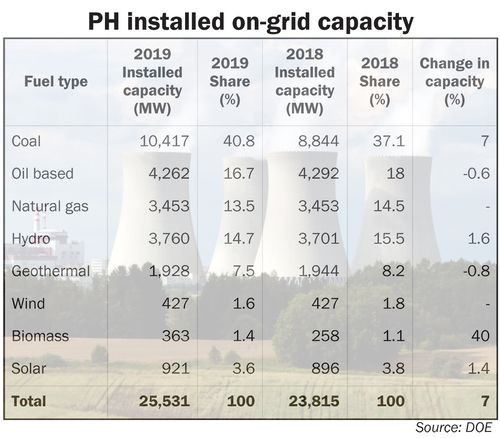 “Nuclear is the most inflexible power in the grid, you don’t want to ramp it up or ramp it down because you want it running steady. That’s not the kind of capacity we need based on the DOE’s plan,” Dalusung said.

DOE had stressed the need to balance the capacity of the said types of power plants to avoid possible disruptions that renewable power plants with fluctuating output may cause.

Among the flexible load power plants identified by DOE which can help in balancing supply depending on real-time demand include geothermal, natural gas and hydro sources.

Sara Jane Ahmed, energy finance analyst of the Institute for Energy Economics and Financial Analysis, said venturing in nuclear energy is not economical, climate and environmental risks not factored in.

“Nuclear obviously has tail risk and as an analyst, I will look at it from a financial perspective… I am overtly negative on nuclear because when we look at the data and look at the top ten major nuclear developments in the world, most of them are 10 to 15 years behind schedule and they are double or triple their original investment and the cost to consumers are prohibitively expensive without a lock-in subsidy,” Ahmed said.

She said subsidies typically last from 20 to 40 years which is not allowed under the Electric Power Industry Reform Act.

“Nuclear, in my view, is totally uneconomic without government subsidy. If we look at it in a rational financial perspective and put aside climate and environment factors and only look at the economics, it doesn’t make sense without a government subsidy,” she said.

A Nuclear Energy Program Inter-Agency Committee was recently created under Executive Order 116 to study the possible adoption of a national position on a nuclear energy program in the country to be submitted to the Office of the President by January 2021.