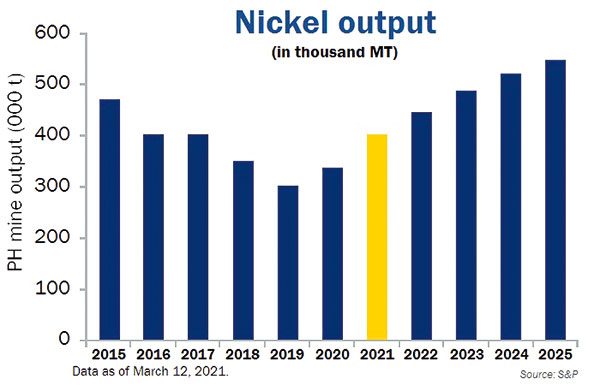 Philippine nickel ore output is expected to sustain its growth over the next five years but its full potential cannot be tapped due to regulations.

“Driven by production from existing operations and recently approved restarts, we forecast Philippine mined nickel output to increase by 210,000 tons between 2020 and 2025 to 550,000 tons,” said S&P Global Market Intelligence in a study released last month.

The Philippines has become the default biggest nickel ore exporter in the world after Indonesia implemented another ban in exporting its nickel ores last year.

However, the study said the 550,000 tons expected production of the country over the next five years is far from Indonesia’s pre-ban peak of 855,000 tons.

“We therefore expect Chinese primary output to fall from 715,000 tons in 2020 to 490,000 tons in 2025 on downward pressure from reduced nickel ore availability. Even if all the inactive Philippines nickel mines are restarted, we estimate that these would only produce about 50,000 tons of contained nickel per year in total, which would be insufficient to meet China’s needs,” S&P said.

It noted at present, only nine nickel mines are operational due to suspension of several mines that failed government audit back in 2017.

These mines are not expected to resume operations due to the ban on open pit mining and the moratorium on new mining projects.

The ban is contained in Department of Environment and Natural Resources’ administrative order 2017-10 while the moratorium is stated in Presidential Executive Order 79 issued in 2012.

“The removal of the moratorium would require a new mining tax policy to be passed into law. House Bill (HB) 8400 seeks to rationalize and institute a single fiscal regime applicable to all mineral agreements. The Philippine Congress, however, continues to play tug-of-war, as HB 8400 has been pending plenary-level approval after a bill seeking a 25-year moratorium on open pit mining was filed in March 2020,” the study stated.

The company said the growth was mainly attributed to the 45 percent nickel price jump that peaked at $33.99 per WMT from the previous $23.52 per WMT.

Global Ferronickel Holdings Inc. (FNI), the country’s second-largest nickel ore producer is yet to release its full 2020 income report but has recorded a 93 percent surge in net income in the first three quarters of 2020, hitting P1.56 billion compared to the previous 805 million.

This was despite lower shipment levels as FNI delivered 80 vessels of nickel ore for the nine-month period against 2019’s 85 vessels due to the suspension of its operations following the lockdowns.