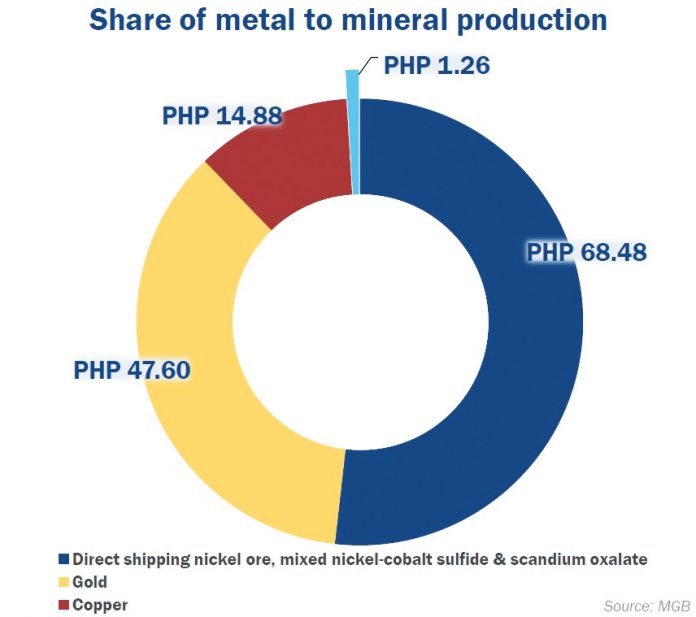 Outlook for 2021 for the minerals industry remains uncertain as the pandemic continues to be a threat to lives and livelihoods.

This is despite a 1.13 percent improvement in metallic mineral production value last year to P132.21 billion from the previous P130.74 billion.

In a report, MGB said nickel ore and nickel by-products including mixed nickel-cobalt sulfide and scandium oxalate had the highest share at 51.80 percent, equivalent to P68.48 billion.

Gold followed with P47.60 billion at 36 percent, copper with P14.88 billion at 11.25 percent, while the shared value of silver, chromite and iron amounted to P1.26 billion which contributed less than 1 percent.

MGB said direct shipping nickel ore was the main driver of the growth as its production volume and value went up by 3 percent and 21 percent, respectively, from 323,325 metric tons (MT) valued at P31.65 billion to 333,962 MT valued at P38.39 billion year-on-year.

The report showed mine output of gold, silver and copper went down mainly due to the absence of the Didipio gold-copper project of OceanaGold in Nueva Vizcaya. Gold dropped 16 percent from 20,646 kilograms (kg) to 17,424 kg, as silver slid 23 percent from 31,267 kg to 24,024 kg.

MGB said with some mining operations still not operational due to environmental related issues or mine- imposed non-operations, outlook for the year remains uncertain.

“We are hoping as the year progresses new mining projects will enter the production-stream and those mining operations that recorded zero production in 2020 will resume operations to inject the much needed lift to the minerals sector,” MGB said in its report.