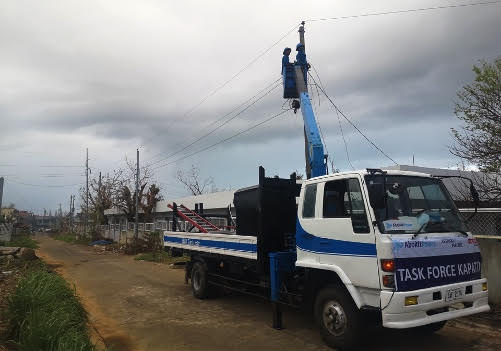 Following the onslaught of super typhoons including Rolly and Ulysses which battered Luzon within a week, San Miguel Corp. (SMC) stepped up efforts to deliver food donations to thousands of families in some 22 provinces and cities continues, with total donations reaching P15 million to date and rising.

“We continue to get appeals for help from so many people affected by the typhoon. It’s a challenge to reach many areas, but with the help of our employees, partners, and local government units, we’ve been able to send out our assistance,” said SMC president Ramon S. Ang.

“Our efforts are still ongoing in various affected areas. We want our kababayans to know that we stand with them, and we will do everything we can to help,” Ang added.

It has also sent food donations to Malabon, Manila, Marikina, and Navotas in the National Capital Region.

A larger amount of food donations have gone out to the hardest-hit provinces where more families have been affected and displaced, Ang said. These include Catanduanes, Cagayan, and Quezon province.

PayMaya has been recognized for its various initiatives to promote cashless payment technologies to help combat the spread of COVID-19 at the recently concluded Asean Business Awards (ABA) 2020 held in Vietnam.

PayMaya was awarded along with 10 other enterprises in the Asean region under the “Combating COVID-19” category of the ABA. It is among the 13 winners from the Philippines who clinched one of the 53 awards handed out by ABA this year from a pool of over 1,000 entries it received from across the region, 98 of which were Philippine enterprises.

PayMaya was recognized for its efforts to promote contactless and cashless technologies to mitigate the spread of the virus causing COVID-19 through its PayMaya app and wallet, which has allowed consumers to continue transacting safely for sending money, bills payment, airtime load, online purchases, and QR payment transactions.

PayMaya has also enabled thousands of merchants with cashless payment acceptance technologies for their online and physical stores, allowing them to accept card or e-Wallet payments from customers safely and conveniently.

To aid in the government’s response to the pandemic, PayMaya has also become a crucial partner of over 60 national government agencies and local government units in safely and efficiently disbursing financial aid to their respective constituents severely affected by the pandemic, and in continuously collecting taxes and other fees through their digital channels.

In the past week, linemen from the Visayan Electric Co. have been working tirelessly to help restore power in the province of Albay, which bore the brunt of the strongest typhoon to hit the country this year.

The Cebu-based electric distribution utility (DU) sent two teams comprising 11 linemen who arrived in the province on Tuesday, Nov. 10. They were deployed to the town of Tiwi, about 44 kilometers south of the province’s capital Legazpi, where its sister company AP Renewables Inc.’s (APRI) geothermal power plant is located.

Equipped with the complete range of classical pilates apparatus, Options Studio offers a range of exercises for everyone including pilates for sports, leisure, lifestyle, and postural correction and rehabilitation.

As the first and only international chain of Pilates and Movement Studios worldwide, it has a lineup of specific programs such as Core Reform, Core Suspend, Core Barre, Rebound, Core Chair, Pre-Natal and Post-Natal, Traditional Mat, and Traditional Reformer. Apart from the traditional pilates classes, the particular branch at Shang is  capable of handling a range of rehab classes as it has a fully equipped rehab facility that will be handled by certified PT Pilates instructors.

The Macquarie Group Foundation will be investing P43 million in Women RISE Fund-Responsive Interventions Supporting Entrepreneurs to inject catalytic capital for women-led small and medium enterprises (SMEs) in the Philippines.

The alliance will work through two local investing partners: the Foundation for a Sustainable Society Incorporated (FSSI) and InBestCap Ventures (InBest).

The Fund will enable these partners to provide much needed investments to women’s SMEs which will have a multiplier effect in the local economy, creating and sustaining more than 200 full-time jobs.

Investing in Women is an initiative of the Australian government.

The snacks company’s Flexible Working Pledge in Southeast Asia, including the Philippines   encourages people to  plan meetings only between 9 a.m. and 6 p.m. local time, not expect same-day responses on after 6 p.m. requests, and take time back after exceptional late-evening requests or meetings at the next possible opportunity.

In the Philippines, the local team has similarly initiated efforts to support flexible working, as well as encourage its people to find the “Right You.”

Since 2017 well before the pandemic, the company had instituted a work-from-home policy for its people.

The MVP Group has expanded its relief operations in Northern Luzon as floods brought about by Typhoon Ulysses submerged the provinces of Cagayan and Isabela.

MVP Group’s umbrella corporate social responsibility initiative Tulong Kapatid (TK) has so far distributed at least 18,500 relief packs to affected residents from various provinces hit by the series of storms in as many weeks.

PSF also turned over 1,100 relief packs to Tuguegarao and Cagayan .

All Honda vehicle owners whose cars were affected by the recent typhoon are entitled to 30 percent  discount on select Honda genuine spare parts and major electronic parts at select Honda Cars dealerships and service centers in Metro Manila and Luzon. The assistance will be available until Dec.  31.

Consisting of videos, comics, infographics, games, and knowledge assessment, these will be delivered to micro-retailers through the eTESDAiSTAR program for e-learning and offline as well.

This forms part of the Safe Store Education component of Rebuilding Sari-Sari Stores Through Access to Resources and Trade  led by Coca-Cola Philippines, the United States Agency for International Development, Department of Trade and Industry , the Technical Education and Skills Development Authority (TESDA), and the Philippine Center for Entrepreneurship.

Safe Education provides access to online training and education on how to operate a retail business safely in these uncertain times and aims to translate the government-issued safety guidelines and protocols into a more simple practical and easily understandable guide for micro-retailers to adapt.

The liquid hand soaps provided by Rock Ed were formulated with an all-natural composition in partnership with a local organic soap distillery. The liquid soap provided to Caltex is mild enough not to dry the hands to encourage frequent handwashing but strong enough to keep microbes at bay.

Rock Ed Philippines, a multi-project creative collective guided by the UN Sustainable Development Goals have been partnering with gas stations to provide hand soaps in handwashing areas to encourage the public to wash their hands often to avoid the spread of the virus.