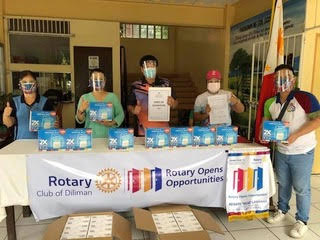 The Rotary Club of Diliman has partnered with Globe in providing Prepaid WiFi kits to teachers in Quezon City to enable online education.

Sixty units of Home Prepaid WiFi kits were donated, which include a WiFi modem and a LAN port, free 10GB of data allocation, and access to educational applications needed for the online teaching and learning process.

FamilyMart will launch in Cebu today, October 28, the new retail format which is a compact version of the full-option concept store that Phoenix rolled out in November 2019.

Catering to motorists and the surrounding communities, FamilyMart will initially be opening three branches in strategic locations; Phoenix V Rama, Phoenix Banilad, and a standalone store in Banawa.

Phoenix developed the new FamilyMart store format as a suitable solution for limited retail areas of 15 sqm to 20 sqm. It offers a more attractive proposition to investor-franchisees with its lower investment cost of Php 500,000 which is up to 90 percent lower than regular FamilyMart franchise packages.

After Phoenix acquired FamilyMart Philippines in 2018, it has re-positioned the brand to bring a genuine Japanese lifestyle retail experience to Filipinos, especially busy urbanites, office employees, and professionals.

The contest is open to all local online seller ages 20 years old and above. The online business must be established originally by the participant. Resellers, on the other hand, are not eligible to join.

To join, the qualified participants must first register through this link bit.ly/jntlfcertifiedlokalista. They will be asked to send their Lokalista story, discussing their Pinoy-made products offered.

Aside from featuring the winning small businesses through the videos shared on social media, the participants will also get a chance to win a total of P20,000 worth of free delivery services that they can use to deliver their products to their customers across the country.

They will be offered to join the VIP platform, the online sellers will enjoy exclusive perks, such as discounts in all the services provided by J&T Express, access to dashboard, free pick up services and many more.

Agoda has launched its HygienePlus feature  in time for yearend celebrations and as the Philippines gets the ‘Safe Travels’ stamp from World Travel and Tourism Council.

HygienePlus, a new verification feature that shows travelers the health and hygiene measures taken by accommodation providers on its travel platform. HygienePlus gives Filipino travelers the added assurance of identifying hotels that meet a checklist of standardized measures—what travelers are looking for in the new normal.

Agoda’s GoLocal campaign which launched globally in July offers great deals for Filipinos to discover their own backyard as they start to travel again.

Agoda’s survey found that “Hygiene Standard Listings” is a priority for Asian travelers, and is the most important hygiene measure for travelers aged 18 to 24 years old globally.

The app features a referral system that  boost the chances of being seriously considered and a higher probability to be interviewed for the position. Referrals also help a company open access to a base of actual job seekers and their respective network of friends, family and contacts.

As a long-chain referral-based job platform, PasaJob allows companies, job seekers, and employees to participate in a system that rewards successful referrers while matching employers to quality candidates. Unlike traditional job boards where the only allowed action is to apply, PasaJob enables users to also refer contacts that will be suitable for the role, and they’ll be given a payout if their referral is successfully hired.

The platform has seen a spike in business processing outsourcing (BPO) and freelance workers job openings  during the lockdown.

FIRST METRO Investment Corp. was recognized in Asiamoney’s Leaders for Women 2020 survey with women employees accounting for more than half of its total workforce.

The Asiamoney survey ranked First Metro among the top five banks in the Philippines, with women comprising 54 percent of its total employees. First Metro was the top investment bank in the country in the survey.

First Metro also had 41 percent of women in senior management positions, with 50 percent of vice presidents being women. Its recent hires from the last graduating batch were all women.

The proportion of women in First Metro is significant, especially in an Asian country where investment banking was considered a ‘man’s world’. According to an Asiamoney report, “sexism, gruelling hours and a drinking culture are among the hurdles that senior female investment bankers in Asia have had to clear.”

Public Works and Highways Secretary Mark A. Villar led the inauguration of the new pumping station which is expected to complement the Blumentritt Interceptor Catchment Area with its with four (4) floodgates, four (4) units of electromechanical pumps with a capacity of 3.5 cubic meters and two (2) generators.

“With an operational pumping station, we can strategically and efficiently discharge floodwater from the Blumentritt Interceptor all the way to Estero de Sunog Apog and then to Manila Bay and prevent overwhelming the catch basin, as well as nearby drainage systems during monsoon season,” said Secretary Villar.