On October 15, NGCP, together with Gawad Kalinga, formally turned over to the city government of Valenzuela the first batch of low-rise dwellings in Disiplina Village, Lingunan, Valenzuela City, a joint in-city housing project for informal settler families.

NGCP, as a power generator, worked with the City of Valenzuela to relocate residents previously living within the transmission right-of-way corridor and are exposed to accidents due to their proximity to the high voltage power lines. This is also in line with the enactment of the Republic Act 11361 or the Anti Obstruction of Power Lines Act, which aims to ensure the uninterrupted flow of power by prohibiting construction of structures and conducting any activity within or along the power line corridor.

In February 2019, NGCP, the Valenzuela City LGU, and Gawad Kalinga broke ground on the 2.5-hectare property of the city government for the establishment of the in-city relocation site. The entire housing project, which costs over PhP 282 million, is comprised of 22 three-storey low-rise buildings with 792 units, and is scheduled for completion by 2021.

The five newly constructed buildings with a total of 180 units will be given to residents of Barangay Mapulang Lupa and Ugong previously residing along the transmission line corridor of NGCP’s San Jose-Quezon 230kV Line.

San Miguel Corp. (SMC) has rolled out a program to provide employees and its extended workforce with bicycles as an alternative mode of transportation. 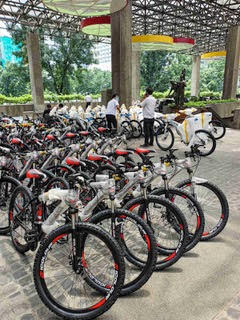 The program enables the employees to avail of bicycles and safety helmets at almost giveaway prices. A bicycle ranges from P2,000 to P3,000 for high-quality, feature-laden bicycles—which they can then pay for with no interest for 12 months. The bulk of the cost for the bicycles is shouldered by SMC.

SMC president Ramon S. Ang said the program was prompted by a surge in demand for bicycles among employees as the company continues to safely bring its employees back to work to continue essential operations.

Made available to employees are commuter bicycles, complete with basket, light, drum brakes, for P2,080 and a compact, hardtail mountain bike with front suspension, front and rear disc brakes, and gearing, for P3,000.

Ayala Corp. once again earns the nod of the Ethical Boardroom as a holding company with the Best Corporate Governance in Asia and Australasia.

Ayala first received such an accolade in 2017.

For 2019, Ayala is joined by Globe Telecoms, which received a Best Corporate Governance Award under the telecom company category. Ayala and Globe are the only Philippine companies that made it to the list.

The Ethical Boardroom is a London-based magazine and website that is trusted by influencers for its unparalleled track record in delivering in-depth coverage and critically aware analysis of global governance issues.

The Foundation recently held a virtual memorandum of understanding signing with the Humanitarian Leadership Academy (HLA) and the Center for Humanitarian Learning & Innovation (CHLI) for the CSR Capability Building Online Training Module under the Aboitiz CSR Academy in celebration of its 32nd anniversary last September 28.

The Aboitiz CSR Academy is the learning and training resources hub that showcases various fields in CSR. It offers online courses and modules curated from various sources, one of which is KAYA, the global learning platform of the Humanitarian Leadership Academy or HLA. These modules can be accessed anytime by the Aboitiz group’s CSR practitioners.

This year’s MaArte Fair goes online for the first time in 12 years.

Proceeds of this year’s MaArte will support the National Museum and other MFPI projects. The online event also seeks to create a new platform for partner micro-small and medium scale entrepreneurs, to help them bounce back from the economic blow dealt by the pandemic.

Through ZALORA, MaArte 2020 will now be able to open its doors, so to speak, to more guests, and tap the 40-years-old-and-below “omnichannel” shoppers.

The fair runs from October 16 to December 31.

__
`Cooperate rather than compete’

Ayala Corp. chairman and chief executive officer Jaime Augusto Zobel de Ayala said  no specific leadership style could work in all types of crisis but that people need a leader who has a point of view, one that looks into the future.

Zobel said good leaders bring together different ideas and facts, using them to create a holistic road map to a future far different from today. They are willing to take risks and go out of their comfort zones. Zobel said that all leaders should have empathy and be comfortable listening, understanding, and connecting to people, while being authentic and true to themselves.

Good leaders, according to him, are sensitive to the changing needs of every generation. Zobel, who joined Ayala in 1981 as a fresh graduate, said he spent so much time working with non-profit organizations which gave him a view of the different social and environmental pain points in the country.

The first business leader from the Philippines and Southeast Asia to be recognized by the United Nations for championing sustainability, Zobel spearheaded the creation of a framework far more inclusive and engaged in addressing different social and environmental challenges. The framework is called the Ayala Sustainability Blueprint, which assigns specific UN sustainable development goals to each business unit.

Zobel stressed importance of prioritizing cooperation rather than competition in this time of crisis. The Ayala Group has been actively working with the national and local governments in building facilities and setting up equipment to boost testing, tracing and treatment capacity through Taskforce T3. The group is also working with other private companies for a safe reopening of the economy.

This  one-stop shop presented healthier and more natural options from local farmers and small entrepreneurs in Cavite and nearby towns in support of the microbusiness unit. The exhibit showcased a variety of crops, herbal and medicinal plants, and different organic byproducts. It also featured plants in light of the growing plantito and plantita community in the region.

Cavite is a largely agricultural province, characterized by rolling hinterlands, coastal and alluvial plains, and forest lands. It also has a scenic upland mountainous area where one can find the breathtaking city of Tagaytay, and southern parts of Silang and Amadeo with its pineapple and coffee plantations and cutflower production.

Cavite’s Happy Garden featured healthy food and wellness options inspired by the beauty and magical experience of Sonya’s Garden in Tagaytay, including fruit jams, Spanish specialties like Tendon Callos in Olive Oil, and its Botanicals range of organic skin and haircare products.

Joyce Mushroom Kitchen’s booth offered its famous white oyster mushrooms as well as its Mushroom Bagoong and Chilli Sauce; while Hive’s and Marshal’s Farm had some of the best raw organic honey.

For Plantitos or a Plantitas starting a mini garden at home, Cavite’s Happy Garden bloomed with wide variety of plants and herbs. Adorable and minimalist pots, hangers, and plants racks delighted the garden enthusiasts.

Cavite’s Happy Garden was one of the many exciting community projects of SM’s Cavite malls.

Biden to name Yellen to Treasury

NIA: Release of dam water not cause of Cagayan flooding