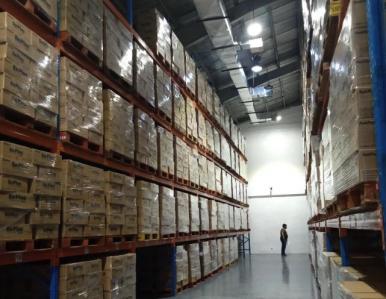 Airspeed has announced that its Manila warehouse has recently been upgraded to a temperature-controlled storage that can effectively house products that need temperature-sensitive solutions like perishable food and beverages; supplements and vitamin products; and make-up.  Located at the Old FDI Bldg. Queensway avenue, Sto. Niño, Parañaque City, the hub offers a spacious 200 square meters (sq.m.)  staging area leading into 2,000 sq.m  of temperature-controlled space with 1,358 fully racked palettes stacked five high and four loading bays. A transparent PVC partition curtain prevents dust from entering the warehouse and helps maintain a temperature of 18 – 28 degrees Celsius.  In this facility, Airspeed invested in a robust Warehouse Management Software to efficiently manage the inventory and equipment, track the orders, and increase product velocity.

The Aboitiz Group has pledged support to the government’s anti-hunger campaign, seeking to address involuntary hunger and malnutrition in the country.

With its own social initiatives aligned with the United Nations Sustainable Development Goals, the Aboitiz Group believes collaborating with the government in its effort to combat hunger in the country or eradicate it altogether is crucial to realizing SDG Goal No. 2 or Zero Hunger by 2030.

Pilmico’s flagship program ‘Mahalin Pagkaing Atin’ campaign (now called ‘Pilmico Livelihood Program) which was launched in 2014 aims to provide sustainable livelihood businesses in places with high incidences of poverty, disasters, and conflicts. It tells the stories of farmers whose produce reflect the various geographical areas in the country, as well as the differences in local farming practices and culture.

Lessandra awards house and lot to ‘The Clash’ Grand Champion

Lessandra has awarded a house and lot to The Clash Season 3 grand champion, Jessica Villarubin  marking the start of the champion’s maaliwalas life in Lessandra communities.

The 24-year old “Power Cebuana Diva” was crowned the winner after the final one-on-one clash with Makati’s Jennie Gabriel. In addition to the P1 million cash, brand-new car, and exclusive management contract, the house and lot from Lessandra complete the jumpstart package towards the life other can only dream of. Villarubin was welcomed to the Lessandra family by Vista Land Chairman Manny B. Villar, through a video message.

Provider of quality and affordable homes, Lessandra helped open a door leading to a bright future for Villarubin as she continues with her journey—reaping the fruits of hard work after a long road towards attaining the grand champion title of The Clash Season 3.

Lessandra is a  rising key player in the home building industry, with its communities strategically located close to progress and nature. Every Lessandra community nationwide is accessible through major highways and developments with community amenities such as a clubhouse, swimming pool, playground, and basketball court. The neighborhood is also secured 24/7 by closed-circuit televisions (CCTVs) and roving and stationary guards. Lessandra is one of Vista Land’s residential brands that caters to the affordable market segment. Visit Vista Land’s website at https://vistaland.com.ph/ for more information.

IPC executives, led by sales division head Joseph Bautista along with officers of the facilitating dealership Isuzu Pagbilao,  were on hand to turn over the Traviz units .

The 25  barangay captains of the municipality, to whom each unit will be assigned, were also present to witness the event.

Bautista said through the Traviz, IPC continues its strong partnership with various sectors of Philippine society, especially in public service, in order to fulfill its commitment to be “Your Responsible Partner.”

The Public Relations Society of the Philippines (PRSP) is expanding its network to the Visayas and Mindanao with the creation of regional chapters.

PRSP said having  chapters in Cebu, Davao and other key cities in the Philippines will open more opportunities and integrate a common aspiration to professionalize the industry. It said this will enable a nationwide way of combatting fake news, disinformation and misinformation while inculcating competence and ethical practice among PR and communications professionals.

The new chapters will be created initially through a partnership with VisMin PR agencies PR Works, Selrahco and Bigseed.

PRSP is holding the 27th National Public Relations Congress virtually  on February 17 to 19,  tackling issues like  the post-pandemic Philippine PR landscape, industry recovery efforts and pressing issues such as mental health in the workplace.

Paint repair may be finished within 24 hours, some within the same day, depending on the damage and color of the vehicle. This program utilizes a special technique to repair a specific spot with minor scratches or dent without removing the affected panel.

Viber recorded a 24 percent increase in users in the Philippines.

Based on the numbers logged on Viber,  Filipinos spent more time on Viber Communities last year as users who viewed Communities jumped up to 198 percent and messages sent to Communities grew by 144 percent.

They were also texting and calling more since Viber recorded 31 percent  leap on messages sent and 41 percent in calls made.

About 13,500 families in Marawi City received assistance and protective aid against COVID-19 as part of the health response launched by World Vision and KOICA, September last year.

The response also provided P1,000 cash assistance to 5,600 families in the city.

Most of the families who received aid from the response are still reeling from the impact of the armed-conflict that happened in the city in 2017.

Call center SYKES was once again recognized as the BPO Company of the Year by the Asia Leaders Awards. The company was awarded for its exemplary commitment to driving and improving the local business process outsourcing (BPO) industry, while still going above and beyond expectations with its pandemic response.

SYKES bagged the prestigious award due to its high-performance workplace that fosters employee engagement and continuous improvement through staff motivation, training, and coaching and development. A significant component of its employee-engagement effort is its SYKES Choices (for Manila sites) and Involve (for Cebu sites) programs.

Herco Trading, the exclusive distributor of Greenfield Tools in the Philippines  together with Handyman Do It Best, conducted relief initiatives for communities in the Bicol Region affected by Super Typhoon Rolly.