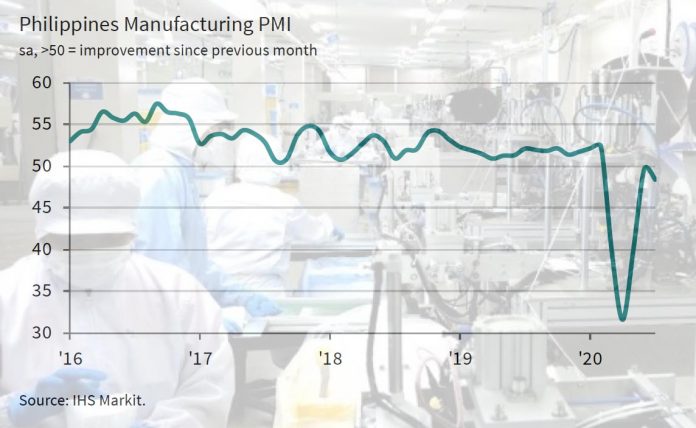 Operating conditions across the Philippines’ manufacturing sector worsened again in July, reversing gains posted in June, as parts of the country remain under lockdown, the latest report by IHS Markit showed.

The IHS Markit Philippines Purchasing Managers’ Index (PMI) dropped from 49.7 in June to 48.4 in July, according to the report released yesterday.

“The latest Philippines Manufacturing PMI data showed that conditions are yet to improve at the start of the third quarter. It was hoped that June PMI numbers would signal the start of a recovery for manufacturers, as output tentatively increased,” David Owen, economist at IHS Markit, said.

“However, production levels dropped back into contraction territory in July, while new orders decreased for the fifth month in a row,” he added.

Owen said as parts of the country remained under lockdown, goods producers appeared to lose out in terms of foreign trade as new export sales fell dramatically despite the relative easing of global restrictions.

“While domestic demand may stabilise, it will be important for businesses to re-strengthen foreign sales in order to recover from this period of (likely) deep recession. IHS Markit forecasts a six percent annual drop in GDP (gross domestic product) in the second quarter,” he added. The report said with the health of the manufacturing sector worsening, firms cut payroll numbers for the fifth successive month in July.

Notably, the rate of job shedding was the quickest since March, it said.

“Jobs are also a long way from returning to pre-COVID levels, with latest data signaling a steep fall in employment again in July,” Owen said.

“With unused capacity still apparent amid a fall in outstanding orders, it could be a while before firms bolster their payroll numbers,” he added.