The country’s manufacturing sector has shown signs of renewed recovery momentum in November, as operating conditions inched closer to stabilization, and output levels rose for the first time since June, a report released by IHS Markit yesterday said.

The IHS Markit Philippines manufacturing purchasing managers’ index (PMI) rose to 49.9 in November from 48.5 in October, the report said, posting just below the 50 neutral value that separates expansion from contraction . 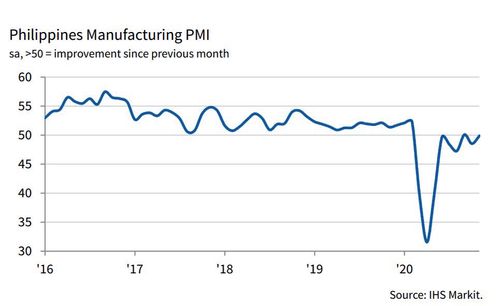 “Encouragingly, firms registered the slowest drop in employment in the current nine-month sequence of decline despite a steep depletion in backlogs of work,” Patel added.

The report said production volumes increased fractionally midway through the final quarter of 2020, with firms attributing this to the reopening of businesses and a softer reduction in new orders.

“Despite a further reduction in new orders, there were signs that the overall demand picture improved in November. Firms recorded only a fractional contraction in the number of new orders placed, as new orders from oversea markets rose moderately, helped by relaxed border restrictions,” it said.

“The increase in foreign demand was in contrast with the historic series average which indicated stabilization,” it added.

Patel however said that the path to recovery may not be smooth.

“The health of the sector rests on the number of coronavirus disease 2019 cases and the impact the virus has on the global economy,” Patel said.

“Whilst vaccine developments look promising, it is still unclear when restrictions will come to a complete end,” Patel added.