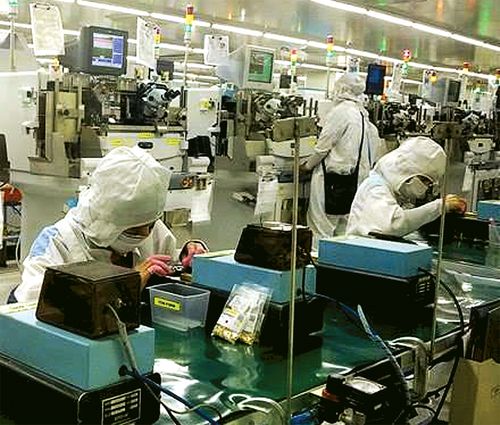 Manufacturing in March posted a modest expansion given a moderate rise in production volumes, according to the latest Philippine Manufacturing Index (PMI) of research firm IHS Markit.

The IHS Markit PMI in March was recorded at 52.2, down fractionally from 52.5 in February, but continuing to post above the 50.0 neutral value that separates expansion from contraction, the research firm said. 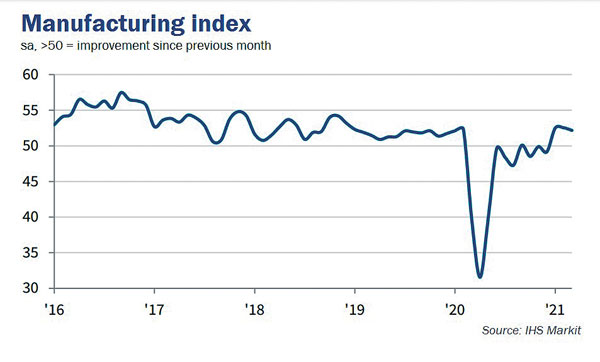 The PMI is compiled from responses to monthly questionnaires sent to purchasing managers in a panel of around 400 manufacturers. The panel is stratified by detailed sector and company workforce size, based on contributions to the gross domestic product.

“The latest reading was indicative of a modest improvement in the health of the manufacturing sector with growth registered throughout the first quarter of 2021,” IHS Markit said.

“Goods producers reported a marginal rise in new order volumes during March. That said, the rate of expansion softened from that seen in February and was weaker than the long-run average. Meanwhile, foreign client demand was especially subdued during the month as restrictions linked to the coronavirus disease 2019 (COVID-19) pandemic persisted in abroad markets,” it added.

IHS Markit also noted an increase in manufacturers’ output, which was “the joint-fastest since June 2019.”

Some firms noted efforts to stockpile finished goods amid expectations of greater demand in the months ahead.

“A number of companies were hampered by resignations during March, which led to the thirteenth consecutive month of contraction in employment. Encouragingly, the latest fall was the softest in the aforementioned sequence and only marginal. Firms were nevertheless still able to clear their backlogs of work, with the rate of depletion in outstanding business sharp overall,” IHS Markit said.

Supply chain pressures, meanwhile, continued to build in March as lead times for inputs lengthened. Panelists cited freight delays as a factor in the deterioration in vendor performance, with delivery times lengthening markedly.

“As such, firms sought to increase their inventory holdings to minimise future shortages due to delays,” IHS Markit said.

Greater output and expectations of an improvement in demand conditions encouraged firms to increase their purchasing activity, it also said.

According to IHS Markit, the rate of expansion equaled the strongest since July 2019 and was solid overall. Aside from boosting pre-production inventories, manufacturers also expanded their stocks of finished goods.

An increase in prices of raw materials due to limited supply has resulted in an increase in factory-gate prices, IHS Markit said, resulting in a “robust” rate of output price inflation, the sharpest since November 2018.

It said the outlook for production remained in positive territory in March, with hopes of stronger economic conditions often linked to positivity.

“However, the degree of optimism posted below the long-run trend, suggesting that the global pandemic continues to weigh on expectations,” it added.

“The Philippines manufacturing sector ended the first quarter on a positive note with a modest expansion recorded in March. Promisingly, output volumes rose despite a moderation in new order growth. Meanwhile, employment levels fell only marginally with anecdotal evidence suggesting that this was mostly voluntary, and not due to cost-cutting efforts at firms,” said Shreeya Patel, economist at IHS Markit.

Patel however said rising price pressures continue to be a key area of concern.

“Nevertheless, a strong first quarter places the sector in good stead for a return to industrial production growth in 2021, with our current forecast expecting a 7.1 percent expansion,” Patel also said.

In particular, SB Equities said the March Morgan Global Manufacturing PMI that is released also by IHS Markit increased to a 10-year high of 55.0 on more robust growth in production, new orders – 56 including export orders – and employment.

Asean manufacturing also recorded an expansion, reading at 50.8 versus 49.7 in February – on higher production, new orders and business sentiment.

“Manufacturing performance was uneven across the region with 4 out of 7 economies recording sectoral expansion,” it however noted.

SB Equities said while the country’s PMI was lower compared to the February index, it has “showcased resilience of the sector in terms of sustaining an expansionary path in the first three months of the year despite the challenges of the pandemic.”

It said the recent imposition of an enhanced community quarantine (ECQ) in the NCR Plus – National Capital Region and the nearby provinces of Bulacan, Cavite, Laguna, Rizal – initially covering one week and extending by another week could weigh on manufacturers’ performance and business outlook.

“This may be similar to August 2020 when the ‘NCR-Plus’ was under a two-week modified ECQ to halt the coronavirus surge, resulting in the country’s manufacturing PMI to drop to a three-month low of 47.3 given deterioration in manufacturers’ operating conditions in terms of lower output and new orders. We conjecture that the stringency of community quarantine measures has a negative impact on manufacturing PMI,” it said.

Lifting of ban on new projects one less hurdle to mining...

Only 3.9B ‘ayuda’ beneficiaries so far paid out