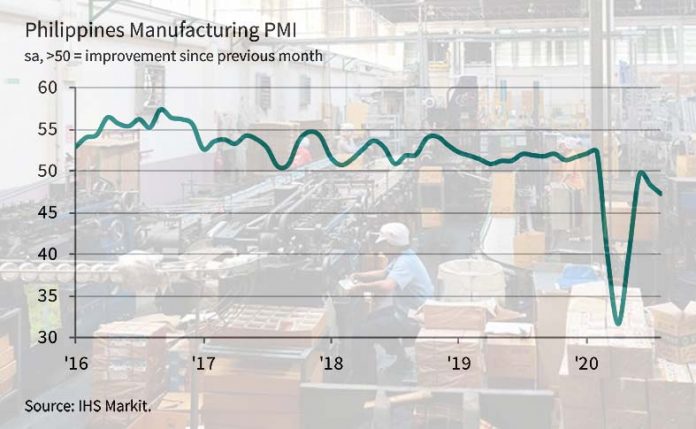 The IHS Markit Philippines Manufacturing PMI fell for the second month running from 48.4 in July to 47.3 in August, to signal a stronger deterioration in operating conditions, according to a report released yesterday.

The index however remained well above its record low of 31.6 in April.

“The imposition of stronger quarantine measures in Manila and some of the surrounding provinces had an adverse impact on demand in August. New work inflows contracted sharply as movement was restricted, while some sectors were forced to operate at reduced capacity,” the report said.

“Notably, the fall in new orders was the fastest seen in three months. Export sales also declined, but only at a modest rate as global COVID-19 restrictions were generally relaxed,” it added.

To recall, Metro Manila, as well as Bulacan, Rizal, Cavite and Laguna, were placed on modified enhanced community quarantine, from the more relaxed general community quarantine status, from August 4 to 18, amid the call of health care workers for a “timeout” as COVID-19 cases continued to rise.

The IHS Markit report said the reduction in manufacturing production was markedly quicker than that seen in July.

“That said, the overall strength of the downturn was much softer than seen in the period between March and May when most of the country faced strict quarantine rules,” it said.

“Stocks were also reduced, extending the run of depletion to six months. Businesses remain less confident than normal of an increase in output over the coming year, reflecting the uncertainty of the path of the pandemic and lockdown measures,” he said.

The report said more businesses predict that output will improve in the year ahead than those expecting a decline, but confidence was much weaker than the series trend.