The gross revenue index of industries declined by 26.8 percent in the second quarter of 2020, as a significant portion of the country was placed under strict lockdown during the period, amid the coronavirus disease 2019 (COVID-19) pandemic.

Data released by the Philippine Statistics Authority (PSA) yesterday showed that in the same period last year, the gross revenue of industries posted a growth of 6.2 percent. 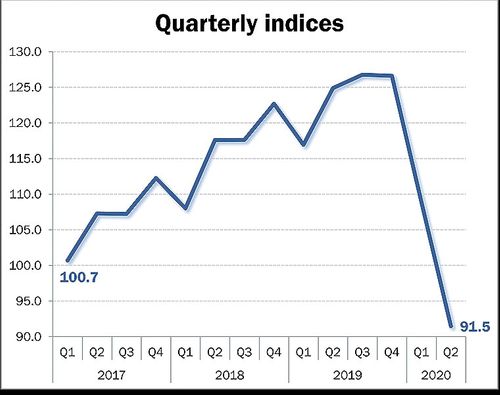 To recall, the government placed majority of the country under community quarantine since mid-March to address the spread of the COVID-19.

This led to minimal economic activity especially during the latter part of March and in the second quarter, when stricter lockdown measures were in place. Many businesses had to temporarily suspend operations, while some had to permanently close or reduce their workforce.

The PSA report is based on the quarterly economic indices, which points out the change of direction in the performance of the industries.

The economy in the second quarter thus posted the sharpest slump for a quarter period on record, due to the economic impact of the said lockdown measures.

The country’s gross domestic product growth rate dropped by 16.5 percent in the second quarter of 2020, the lowest figure posted based on the available quarterly data which starts from 1981.

The PSA said among the industries, transportation, storage and communication recorded the largest decline of 44.7 percent. This was followed by declines in other services by 40 percent; real estate by 35.8 percent; and manufacturing by 35.3 percent.

The total employment index also recorded a 15.1 percent decline during the period.

Construction registered the largest drop with 29.6 percent. This was followed by other services and transportation, storage and communication, both with 18.8 percent decline; and manufacturing with 15.2 percent drop during the period.

Transportation, storage and communication had the biggest drop with -31.1 percent. Other industries contributing to the fall were: construction, -26.8 percent; manufacturing, -20.5 percent; mining and quarrying and other services both with 14.3 percent decline.