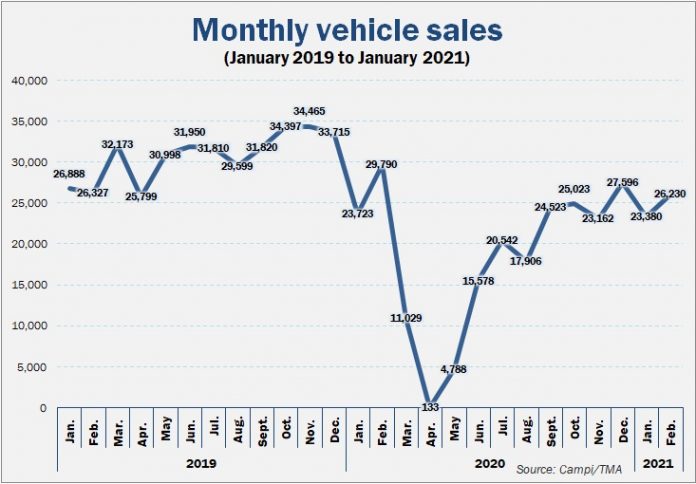 Vehicle sales rose 12.2 percent in February from the previous month but industry players express concern the imposition of the provisional safeguard measures starting this month could derail recovery.

A joint report by the Chamber of Automotive Manufacturers of the Philippines Inc. (CAMPI) and Truck Manufacturers Associationreleased yesterday showed February sales reached 26,230 units compared with 23,380 units in January.

Rommel Gutierrez, president of CAMPI, in a statement said the industry achieved a double-digit recovery due to increases posted across all categories.

Both categories of heavy-duty trucks and buses have recorded double-digit growth of 19 percent and 39 percent, respectively, with sales of 289 and 103, respectively.

LCVs and passenger cars imported as completely-built up are slapped additional duties of P110,000 and P70,000, respectively, per unit effective March 1.

Automotive companies have started collecting the duties, plus value-added tax, as a cash deposit of buyers.

“CAMPI expresses concern on the imposition of safeguard measures. While the industry sees early signs of recovery, the provisional import duties, more so if it becomes definitive, will derail any recovery efforts of the automotive industry,” Gutierrez said.

Gutierrez said rather than restricting imports, a better incentive scheme must be crafted to attract investments for local production of motor vehicles.

GR GT Cup 2021 flags off first round of races