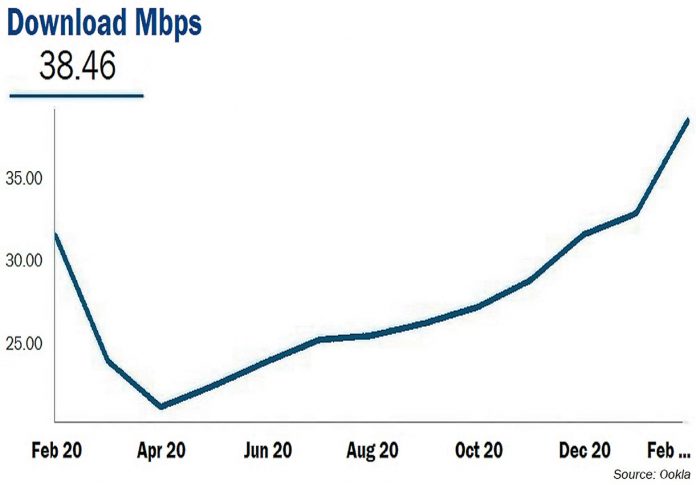 The 38.46 Megabits per second (Mbps) fixed broadband average download speed in February represents a monthly increase of 17.51 percent and a 386 percent jump from the country’s download speed of 7.91 Mbps back in July 2016.

The mobile network overall performance also improved, with an average download speed of 26.24 Mbps, increasing by more than threefold from 7.44 Mbps in July 2016.

The improvement in the country’s internet speed comes after the President’s directive last July to expedite the facilitation of permits by local government units for building cellular towers.

This led to a significant increase in the issuance of permits from July 2020 to January 2021 which, in turn, resulted in more cellular towers. During this period, a total of 3,211 additional towers or physical sites were built.

The telcos also continue to invest heavily on their fiber optic network, with a total of 320,748 cable-kilometers already laid out all over the country to date.

PLDT Inc. and its mobile unit Smart currently have the widest network with 178,061 cable-kilometers of fiber optic built.

The National Telecommunications Commission and Department of Information and Communications Technology have been meeting with Globe, Smart, DITO and Converge to identify problem areas in the telcos’ infrastructure rollout.

Immediately addressing issues raised help ensure the telcos’ plans for expansion and improvement in 2021 are completed in time.

The meetings are essential in closely monitoring the telcos’ progress in helping the country improve its internet speed, resulting in better global rankings at Ookla’s Speedtest Global Index.

The telcos’ performance is being closely monitored after President Duterte said improvements in telco services need to be maintained and to make the country’s internet speed eventually at par with its Southeast Asian neighbors.

Meanwhile, Globe Telecom Inc. in a statement yesterday said nearly half a million of its subscribers were using fifth generation (5G) devices as of end February.

Globe is a pioneer in 5G in the Philippines with coverage services in 1,069 areas across the country, of which 848 locations in Metro Manila and Rizal; and in 221 areas in Visayas and Mindanao as of January this year.

“We see our customers consuming more data as their needs change especially with the pandemic. We want them to unlock the many possibilities and potential that 5G technology brings, and Globe is committed to giving them superior technology to create the quality of lives they want,” said Coco Domingo, Globe vice president for postpaid and international.

Globe has also made its 5G service available abroad with the launch of 5G Roaming in Thailand via AIS and soon in other parts of Asia, Middle East, North America, and Europe.

Prince Harry arrives back in the UK for Prince Philip funeral

‘The right path’ – Chile defends Sinovac use amid fresh efficacy...

SUBSIDIES TO FIRMS POSSIBLE: 1M yet to get jobs back

Stiff penalties for use of fake test results