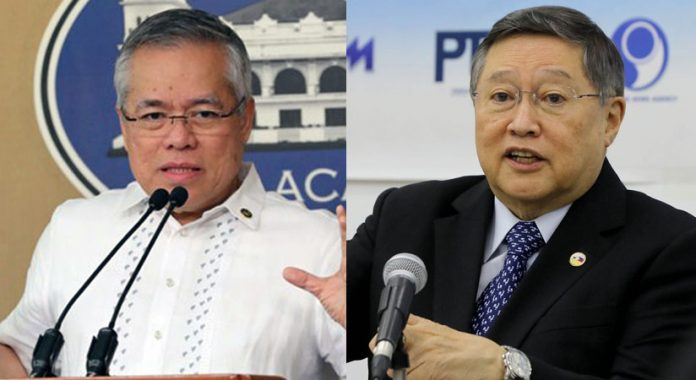 By ANGELA CELIS and IRMA ISIP

The Philippines may be foregoing half of its investment potentials from foreign investors due to the restrictions on  ownership of businesses but the country’s economic managers believe passing key pieces of legislation is the low-hanging fruit that would ease some of those limitations without amending the Constitution.

Finance Secretary Carlos Dominguez and Trade Secretary Ramon Lopez at the 9th Regular Meeting on Constitutional Amendments on the Proposed Charter Change on Economic Provisions in the 1987 Constitution echoed calls to pass the Corporate Recovery and Tax Incentives for Enterprises (CREATE) Act as well as the amendments to the  Retail Trade Liberalization Act, the Public Service Act and the Foreign Investments Act.

For Dominguez, the economy must be opened up “to its widest extent” with the exception of land ownership.

He said legislators may pass a measure which will allow foreigners to lease land for a longer time frame especially for investments that require longer payback.

“The ban on the foreign ownership of land… should remain since this evokes strong emotional reactions,” Domiguez said, adding that some of the acts required to liberalize the economy need not be done through the Constitution.

“They could be done administratively or through the legislature,” he said.
With only 17 months left before President Duterte ends his term of office, Dominguez asked members of the Congress “to act on something that is doable.”

“It is preferable, of course, to achieve the liberalization reforms in one blow. But if there are things that we can do to open up the economy through administrative measures, we must implement them….amending the Constitution, however, is a political question,” Dominguez said.

Lopez for his part said: “Nobody can stop Congress to start meaningful reforms… those that we can start doing…those should be the  priority,” referring to the key economic bills pending in Congress.

Lopez urged  legislators “to be mindful of the importance of timing given the urgent need to re-start and accelerate the economic growth of the country.”

“We definitely find merit on the initiatives to remove any provision restrictive to economic progress …we pose no objection to the review of economic provisions of our Constitution to address these barriers to investments . We are just mindful of the current challenges brought about by the pandemic, including the nearing 2022 presidential elections that might affect the focus, nature and pace of the deliberations, but we leave that concern to the wisdom of our legislators,” Lopez said.

Opening up, he said, should redound to the benefit of the country regardless who owns the business.

But according to Lopez, the first thing investors ask when they inquire about investing in the country is if they can take a majority ownership in a company particularly in retail trade,  public services, higher learning education and construction.

“While our economy has been recognized as the second fastest growing economy in Southeast Asia until the year 2019, right before the pandemic struck, with average growth of over 6 percent for 14 consecutive quarters, we also know that such growth rates could have even been much higher if we were able to remove basic restrictions as to foreign ownership of businesses in certain sectors stipulated in the constitution,” Lopez said.

Meanwhile, 10 local business groups yesterday reiterated their opposition to any initiative at this time to amend the Constitution and renewed their calls for  government to maintain its focus on safe economic recovery.

If at all, talks of any amendment should be entertained in the next Congress or during the next president’s term.

“We believe that introducing any charter change 15 months before presidential elections will only raise fears that other constitutional changes, some of which may be highly controversial, may be introduced and passed. Thus any attempt at Charter Change now will be highly divisive at a time when our country still needs to be totally united in our efforts to overcome the ill effects of the pandemic, “ the business groups said.

The groups  instead urged all major presidential and congressional candidates in the coming 2022 elections to express their support for the relaxation of restrictive economic provisions in Constitution and commit to initiate steps for the adoption of such provisions within the first 12 months of their term.

The groups support the passage of the Public Service Act amendment which  lifts restrictions on foreign equity ownership in some sectors currently classified as public utility before the end of the 18th Congress.