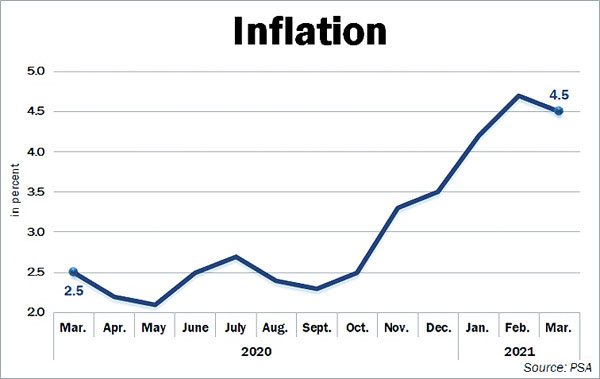 Slower price increases for the heavily-weighted food basket pulled inflation lower to 4.5 percent in March from a two-year high of 4.7 percent posted a month ago, data from the Philippine Statistics Authority showed.

This brings the average inflation of the country for the first quarter of 2021 at 4.5 percent, exceeding the top end of the government’s full-year target range of between 2 and 4 percent.

PSA said the slowdown in inflation at the national level was “primarily due to the lower annual increment registered in the heavily-weighted food and non-alcoholic beverages at 5.8 percent in March 2021, from 6.7 percent inflation in February 2021.”

Annual increases also decelerated in the indices of alcoholic beverages and tobacco; furnishing, household equipment and routine maintenance of the house; communication; and restaurant and miscellaneous goods and services.

Benjamin Diokno, Bangko Sentral ng Pilipinas, said March inflation “is consistent with expectations that inflation could settle above the high end of the target in 2021.”

“(This) reflects the impact of supply side constraints on domestic prices of key food commodities, such as meat, as well as the continuing rise in world oil prices,” Diokno said.

But Diokno stressed inflation is still seen to return to within target band, also between 2 and 4 percent, in 2022 “as supply side influences subside.”

“Tighter domestic supply of meat products and improved global economic activity could lend further upward pressures on inflation. However, ongoing pandemic also continues to pose downside risks to the inflation outlook, as the recent surge in virus infections and challenges over mass vaccination programs continue to temper prospects for domestic demand,” Diokno said, adding that “timely and effective implementation of direct measures by the national government could contribute to easing price pressures.”

Diokno said the “prevailing monetary policy settings remain appropriate to support the government’s broader efforts to facilitate the recovery of the economy.”

“At the same time, the Monetary Board emphasizes that the timely implementation of non monetary interventions is crucial in mitigating the impact of supply side pressures on inflation and thereby preventing them from spilling over as second round effect,” Diokno said.

Even if inflation has shifted higher in the last five months, the policymaking Monetary Board late March maintained the key rates of the BSP.

Nicholas Mapa, ING Bank Philippines senior economist, said they expect the Monetary Board to keep the rates to help “bolster the economic recovery.”

“Despite the inflation target breach, BSP has vowed to retain its current accommodative stance, citing the transitory nature of the current spike in prices. Monetary authorities remain hopeful inflation will decelerate once supply-side remedies to African swine fever takes root although the latest central bank inflation forecasts pegs inflation to settle above target in 2021,” Mapa said.

“We expect BSP to keep policy rates at 2 percent in order to bolster the economic recovery with several regions now under strict lockdown due to a recent spike in new COVID-19 infections. BSP will only consider recalibrating monetary policy should second round effects such as wage hikes become apparent or if inflation expectations become disanchored,” Mapa added.

“Food inflation, which accounts for nearly 36 percent of the total CPI basket, slowed to 5.8 percent from 6.7 percent in the previous month with notable declines for the price of meat, fish, vegetables and fruits. Transport costs continued to pickup with transport services rising 13.8 percent due to higher retail fuel prices and implementation of social distancing guidelines,” Mapa explained.

“Inflation for other services also saw prices accelerate, up 3.1 percent with costs associated with the ongoing pandemic, such as personal protective equipment and takeout surcharge, pushing up headline inflation. Signs of weak domestic demand continue to manifest with the recreation and culture component posting deflation for a 9th straight month with Filipinos likely cutting back on luxuries given the recession,” Mapa said.

PSA said inflation in NCR decelerated to 3.7 percent in March from 4.1 percent in February 2021, primarily pushed down by the slower annual uptick in food and non-alcoholic beverages index.

Inflation in areas outside NCR also slowed down to 4.7 percent in March from 4.8 percent in the previous month, mainly brought about by the lower annual rate of increase in the index of food and non-alcoholic beverages.

PSA also noted that six regions exhibited lower inflation during the month. The lowest inflation remained in Region VII (Central Visayas) at 1.5 percent, while the highest was in Region V (Bicol Region) at 8 percent.