The country’s export earnings posted growth for the first time in seven months in September, while imports continue to decline, contracting for the 17th straight month, data released by the Philippine Statistics Authority (PSA) yesterday showed.

According to the PSA, the Philippines posted a trade deficit of $1.71 billion in September, reflecting an annual decline of 49.9 percent.

In the previous month, the trade shortfall fell at a slower rate of 39.1 percent, and at an even slower pace in September 2019 with a decline of 15.3 percent. 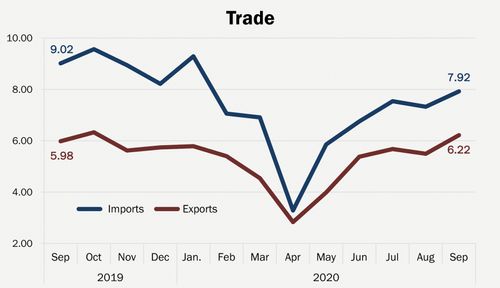 The country’s total export sales for the month amounted to $6.22 billion, up 2.2 percent from a year ago. In the previous month, a 12.8 percent decline was recorded, while in September 2019, the exports performance posted a gain of 0.4 percent.

The PSA said the export earnings in September marked the first positive growth in a while, versus the year-on-year contractions posted in March to August.

Meanwhile, the total imported goods in September amounted to $7.92 billion, posting an annual decline of 16.5 percent.

The value of imports contracted for the 17th straight month. In August, the drop was higher at 21.3 percent, while imports also fell 5.8 percent in September 2019.

“Exports to China helped the sector post an expansion with outbound shipments up a whopping 43.3 percent as China’s economy opens up after getting control of the virus,” Mapa said.

On the other hand, the steepest falls in imports were recorded in fuel (51.4 percent), capital goods (17 percent) and consumer goods (13.8 percent), which Mapa said showed a broad based downturn in economic activity as the Philippines remains mired in a recession.

“The Philippine trade deficit continues to tighten given stark import compression, driven by a broad-based decline in economic activity. The sharp contraction in the trade deficit has helped the current account swing back into surplus which remains a positive for PHP in the near term,” Mapa said.

“However, the sustained downturn in imports of raw materials and capital goods points to a continued deterioration in productive capacity and potential output, which does not bode well for prospects for the economic recovery,” he added.