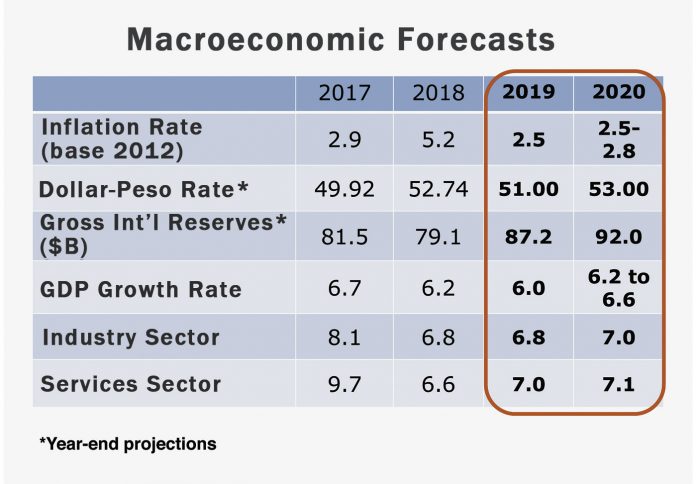 Growth is seen to pick up this year from a year ago on strong consumer and infrastructure spending, according to an investment bank.

First Metro Investment Corp (FMIC) sees the economy expanding between 6.2 and 6.6 percent this year from an estimated 6 percent last year.

But it said foreign investor sentiment is likely to put a dent on the prospects of the economy.

Francisco Abola, University of Asia and the Pacific (UA&P) economist, said growth will be supported by “higher domestic demand underpinned by magnified consumer spending and the national government’s catch-up plan to bring infrastructure spending to 5.7 percent of GDP.”

Remittances which grew 4.6 percent to $24.8 billion in 2019 are expected to remain resilient and to maintain a 2 to 4 percent growth.

The peso is estimated to trade at 53 to a dollar, lower than its current levels.

FMIC said the weakening of the peso is attributed to the increase in trade deficit as the government ramps up infrastructure spending this year.

“The local bond market will be trading in a range as several risk factors will affect movement sin interest rates. Though we anticipate the BSP (Bangko Sentral ng Pilipinas) to cut reserve requirement by 1 to 2 percent and potentially reduce policy rate by 50 bps (basis points) from current levels, this may be offset by inflationary pressures brought by  fortuitous events and geopolitical factors. The 10-year benchmark bond will range trade between 4.735 to 5 percent,” said Arjonillo.

FMIC said the Philippine Stock Exchange index is projected to climb to 8,600 to 8,900 this year with price earnings ratio of 16.8-17.4x. Corporate earnings are projected to grow by at least 10 percent underpinned by “robust macroeconomic fundamentals, supported by low interest rates and low inflation environment.”

FMIC also said the equity capital market is seen to gain stronger momentum as corporate earnings are likely to follow the country’s economic expansion. Market developments such as the emergence of real estate investment trust, the introduction of short-selling and the implementation of the proposed 25 percent increase in the minimum public float would spur trading activity in the stock market.

The debt capital is anticipated to be very active on the back of continued low interest rate environment, solid macroeconomic fundamentals, and debt refinancing opportunities for both corporates and banks.

Abola said the Philippines, however, needs to resolve fast the ongoing overhang in the recent tussle over the water distribution franchise, which could put a drag on foreign investors’ sentiments going forward.

Abola said foreign sentiments carry lag on its impact on the economy, which implies that its effect will not be felt until next year if the issue is not resolved the soonest possible time.