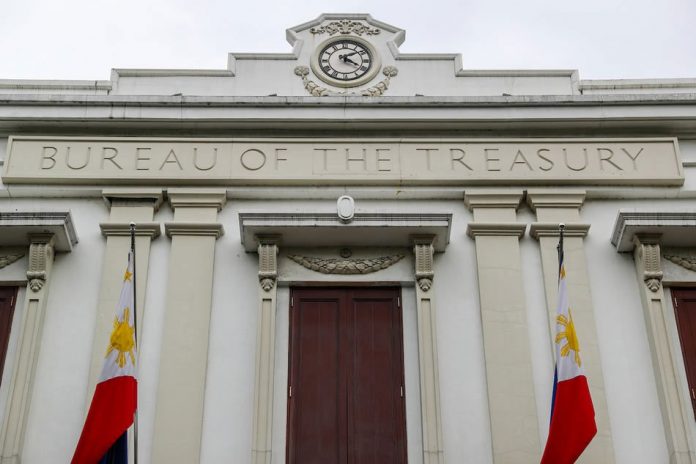 The national government’s outstanding debt has breached the P9 trillion mark as the government borrowed more to support its coronavirus disease 2019 (COVID-19) response, data released by the Bureau of the Treasury (BTr) showed.

In a press release yesterday, the BTr said the outstanding debt level has reached P9.05 trillion, jumping 15.1 percent from the end-June 2019 level of P7.87 trillion.

It also rose by 1.8 percent from its end-May 2020 level of P8.89 trillion, primarily due to the net issuance and availment of domestic and external financing.

The government had to increase borrowings amid the immediate need to fund measures to address COVID-19, while revenue collections weakened due to quarantine measures which limited economic activity.

Of the total outstanding debt stock, 32 percent were sourced externally while 68 percent are domestic debt.

The national government’s domestic debt amounted to P6.19 trillion as of end-June, 16.9 percent up from the year ago level of P5.29 trillion.

It also rose by 2.6 percent compared to the end-May level of P6.03 trillion, due to the net issuance of domestic government securities. The national government’s domestic borrowing for the year amounts to P1.68 trillion as of end-June.

It also went up by 0.3 percent from the previous month.

“For June, net availment of external loans amounted to P48.81 billion which was offset by P41.5 billion mainly due to local currency appreciation. National government external financing registered an inflow of P413.46 billion for January to June 2020 vis-à-vis debt repayment of P113.46 billion,” the BTr said.

In a related development, the BTr said in a separate statement it is eyeing to raise P170 billion from its treasury bills and treasury bonds offerings next month.

This amount is lower than the P205 billion in July as there was an extra week this month covering two auction schedules.

The BTr usually issues a quarterly domestic borrowing program, but it has released its planned offering on a monthly basis since April as it took into consideration recent developments, particularly the COVID-19 pandemic.

The 91-day, 182-day and 364-day treasury bills will be offered four times in August, with volumes of P5 billion, another P5 billion and P10 billion, respectively, for a total of P20 billion every auction.

The 35-day securities will be offered twice next month, with volume of P15 billion each.

The BTr will also auction 10-year and 20-year treasury bonds in August, with a volume of P30 billion for every auction.

Meanwhile, the World Bank’s newly named director, in a statement sent by the Department of Finance (DOF), said the Duterte administration’s prudent fiscal management strategy has positioned the Philippines as among the countries “in good shape” to meet the challenges spawned by the COVID-19 pandemic.

With the Philippines’ debt of equivalent to just 40 percent the size of its economy at the time the pandemic struck, the Philippine government has enough fiscal space to address the emergency triggered by the COVID-19 global crisis, said Ndiame Diop, the newly designated country director of the World Bank for Brunei, Malaysia, the Philippines and Thailand.

“We are looking at the Philippines and comparing to other countries in the region and looking at the initial condition, what is the economic condition when the pandemic hit.… I think the prudent fiscal management of the past few years has really positioned the country to be among the countries that are really at the forefront in terms of capacity to respond on the fiscal side,” Diop said in a recent virtual meeting with Carlos Dominguez, DOF secretary, and members of the “Build, Build, Build” infrastructure team.

The Philippines’ debt-to-GDP (gross domestic product) ratio before COVID-19 plunged the world into a global economic downturn was at 39.6 percent in 2019.

Dominguez has underscored the conservative fiscal policies of President Duterte as a critical factor in maintaining the Philippines’ high credit worthiness, which has enabled it to secure borrowings from development partners for the government’s COVID-19 response efforts at the least cost.

Diop said other countries facing national debts in relation to their respective GDPs of 60 to 70 percent will face a “tough” period ahead.

“So I think the good shape in which the Philippines is under this crisis positions it very, very well going forward,” he added during the meeting held via the Zoom teleconferencing tool.

Dominguez assured the World Bank that even amid the pandemic, the Duterte administration is fully committed to carry out its “Build, Build, Build” infrastructure program, which was another recommendation of the multilateral institution in sustaining the Philippines’ inclusive growth strategy.

Diop said the World Bank is looking forward to “getting quick results” in its infrastructure engagement with the Philippines.

Victor Reyes - January 26, 2021
THE chief of police of Batac, Ilocos Norte is in hot water after his office posted erroneous information about the anti-terrorism law that President...