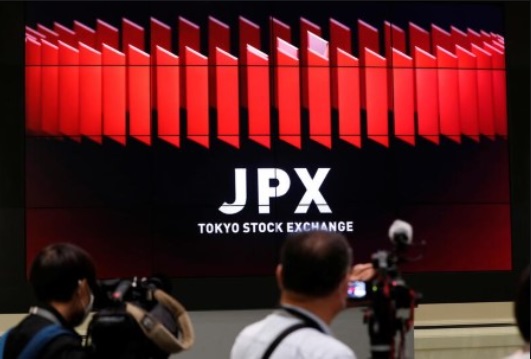 TOKYO- Global shares slipped on Thursday as investors locked in recent gains amid rising concerns about resurgent COVID-19 infections and after US Treasury Secretary dashed any remaining hopes of a stimulus package before the Nov. 3 election.

US S&P 500 futures sagged 0.27 percent in Asia after major US stock indexes ended the previous session lower, with the S&P 500 closing down 0.7 percent and the Nasdaq Composite Index shedding 0.8 percent.

Concerns that a resurgence in the COVID-19 pandemic could lead governments to again shut down economies spurred profit-taking, particularly after the recent stock rally.

With COVID-19 cases surging, some European nations are closing schools, cancelling surgery and enlisting student medics as overwhelmed authorities braced for a repeat of the nightmare scenario seen earlier this year.

That helped push the German 10-year Bunds yield to as low as minus 0.586 percent, a rate last seen in May.

Tensions between Beijing and Washington remain in view after the US State Department submitted a proposal for the Trump administration to add China’s Ant Group to a trade blacklist, according to two people familiar with the matter, before the financial technology arm of e-commerce giant Alibaba is slated to go public.

Downbeat comments from US Treasury Secretary Steven Mnuchin that a stimulus deal was unlikely be made before the Nov. 3 vote also provided another excuse for profit-taking.

Still, many investors expect large stimulus after the election, which Democratic presidential candidate Joe Biden is increasingly expected to win.

Although Biden has been seen as more likely to raise taxes on corporate profits and capital gains, investors are also pointing to other potential benefits of a Biden presidency, such as less global trade uncertainty.

“It smacks of opportunism when markets were saying just a few months ago stocks would crash if Trump would lose and now they say Biden victory would be good for stocks,” said Norihiro Fujito, chief investment strategist at Mitsubishi UFJ Morgan Stanley Securities.

“What this suggests is that markets are flush with cash after massive monetary easings by global central banks.” — Reuters