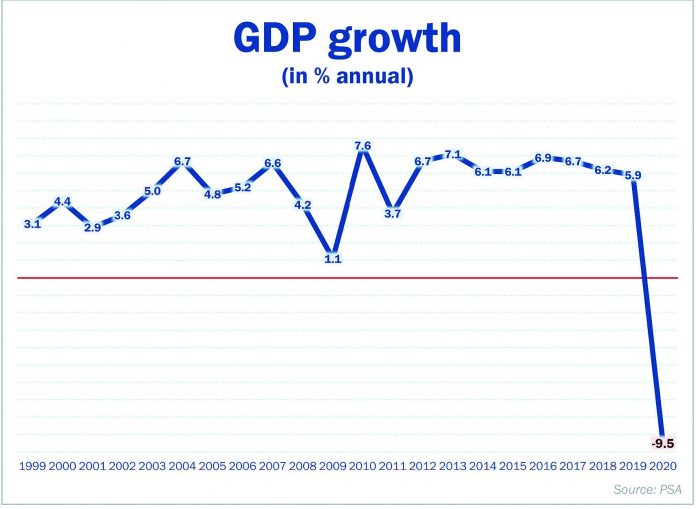 The Philippines posted its worst economic contraction on record in 2020 as it shrank 9.5 percent due to the impact of the coronavirus disease 2019 (COVID-19) pandemic.

Dennis Mapa, national statistician, said in a joint press conference of the Philippine Statistics Authority (PSA) and the National Economic and Development Authority yesterday the economy’s contraction is the lowest since 1946, when the government started collecting the annual data for the gross domestic product (GDP).

“The second one happened in 1984, where GDP contracted by seven percent,” Mapa said, referring to the second worst decline on record.

The full year economic performance falls on the lower end of the Development Budget Coordination Committee’s (DBCC) latest projection for 2020 of -8.5 to -9.5 percent.

In the fourth quarter alone, the economy shrank by 8.3 percent.

Although a reversal from fourth quarter 2019’s 6.7 percent growth, the drop in the last three months of 2020 was an improvement from the 16.9 percent plunge in the second quarter of the year, which coincides with the implementation of the strictest level of community quarantine, and the 11.4 percent decline in the third quarter.

“In the fourth quarter of 2020, our economy performed better with a smaller GDP contraction of 8.3 percent. On a quarter-on-quarter basis, the economy grew by 5.6 percent,” Karl Kendrick Chua, acting socioeconomic planning secretary, said during the virtual briefing.

“This improvement was the result of the further reopening of businesses and wider accessibility of public transport since October 2020. However, it also shows the limits of economic recovery without any major relaxation of our quarantine policy,” he added.

According to the PSA, among the major economic sectors, agriculture, forestry and fishing (AFF) registered a 2.5 percent decline in the fourth quarter of 2020, while services and industry posted -8.4 percent and -9.9 percent, respectively.

Chua said the further opening of the economy led to smaller contractions in industry, manufacturing and services growth.

“However, agriculture performance deteriorated and contracted by 2.5 percent due to a series of typhoons, flooding, and the African swine flu. Six typhoons, namely typhoon Nika, Ofel, Pepito, Quinta, Rolly, and Ulysses, caused some P16.6 billion worth of losses and damage to agriculture. To prevent further spread of the disease, some 432,000 hogs were culled,” he said.

On an annual basis, the growth rates are as follows: AFF at -0.2 percent, followed by services at -9.1 percent and industry at -13.1 percent.

Chua said on the demand side, private consumption, which comprises some 70 percent of GDP, remained weak with a contraction of 7.2 percent.

He said while the government relaxed the restrictions in the supply side by allowing more public transport and establishments to operate, restrictions on the demand side, notably on the mobility of children, and hence families, prevented private consumption from making a stronger comeback.

“The Philippines has a young population where the median age is 25 years old. Forty percent of our population is below 20 years old. Economic growth will be hard pressed to make a stronger recovery if children and families are restricted from participating in the economy, as up to 50 percent of non-essential retail sales are driven by family spending,” Chua said.

Chua said on a per capita basis, annual family income declined by some P23,000 per worker, but this average masks wide differences across sectors and jobs.

He said the government considered to pilot face-to-face classes this month and reduce age bracket in the lower risk areas or those under modified general community quarantine.

“The IATF (Inter-Agency Task Force on Emerging Infectious Diseases) has looked at both the economic and the health data and we have presented (these) to the President.

However, the latest data on the new COVID-19 variants came as we presented our proposal,” Chua said.

“The President has taken the right decision to postpone this, and we will continue to look at both the economic and the health data as well as our effort to have monthly labor force survey to better inform the President so that we can make the decisions, as the situation improves,” he added, as he mentioned that starting January 2021, the government will be conducting the labor force survey monthly to get more timely data on jobs, thus allowing it to take more timely actions to address any emerging issues.

“Investments had a slower contraction of 29 percent from (a decline of) 41.6 percent in the previous quarter. Both private and public constructions saw improvements, but inter-province travel restrictions have prevented many workers from going back to work,” Chua said.

“Moreover, international travel restrictions and the resurgence of the virus in advanced economies also affected the pace of construction as their experts had a difficult time coming to the Philippines,” he added.

Chua also noted higher infrastructure disbursements by the government for the full year relative to the programmed levels. Citing preliminary data from the Department of Budget and Management, Chua said actual spending in the fourth quarter was at P230 billion, 29.21 percent up versus the P178 billion program, while full year infrastructure disbursements was P681 billion, exceeding the P609 billion program by 11.82 percent.

“However, when compared to the high base in the fourth quarter of 2019, it was 32.5 percent lower given the government’s catch-up plan following the delayed congressional approval of the 2019 budget,” he said.