As Filipinos tried to celebrate as much as they could the holiday season despite the various lockdown measures, inflation in December accelerated to its fastest level in almost two years brought about by the increase in prices of food and non-alcoholic beverages.

The Philippines Statistics Authority (PSA) yesterday said inflation in December went up to 3.5 percent from 3.3 percent the previous month. In December 2019, inflation stood at 2.5 percent. 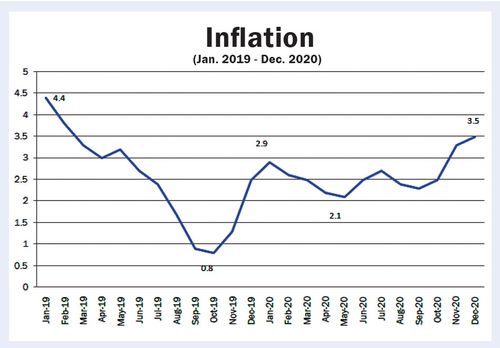 Last month’s inflation is the highest inflation recorded since March 2019.

PSA said the uptrend in the country’s inflation was “primarily brought about by the increase in the inflation of heavily-weighted food and non-alcoholic beverages at 4.8 percent during the month, from 4.3 percent in November 2020.”

PSA added price increases were higher in the indices of health at 2.6 percent, transport at 8.3 percent, and restaurant and miscellaneous goods and services at 2.5 percent.

Inflation, however, slowed down in the indices of alcoholic beverages and tobacco, 12.2 percent; housing, water, electricity, gas and other fuels, 0.5 percent; furnishing, household equipment and routine maintenance of the house, 3.3 percent; and communication, 0.2 percent.

For full-year 2020, inflation averaged at 2.6 percent, still at the low end of the government’s target range of between 2 and 4 percent but slightly higher than 2019’s full-year average of 2.5 percent.

“The overall balance of risks to future inflation continues to lean toward the downside owing mainly to the continued uncertainty caused by the pandemic on domestic and global economic activity,” Diokno said, stressing that the recent uptrend “is seen to be largely transitory reflecting the short-term impact of weather disturbances.”

He added upside risks emanate from the possibility of an early rollout of the novel coronavirus vaccines in the Philippines “which is expected to ease the existing lockdown measures and expand further operating capacity of the economy.”

“At the same time, a stronger than expected world economic recovery as the vaccine is increasingly deployed in key economies abroad could present upward price pressures on global oil and food prices,” Diokno said.

Karl Chua, acting socioeconomic planning secretary, said even with the low inflation environment, “there is still a need to improve supply chain efficiency to ensure that prices of essential goods and services remain stable.”

Chua said the faster inflation in agricultural products could be traced to lower production following the damage caused by previous typhoons. He added that meat inflation inched up for the third consecutive month owing to the decline in domestic swine production due to the African swine fever.

“(There is a) need to establish processing facilities that will prevent wastage and spoilage of farm harvests, such as the Benguet Agri-Pinoy Trading Center in the Cordillera region where a large part of the country’s supply of vegetables is sourced,” Chua said.

He added the government needs to set up additional cold storage facilities, warehouses and post-harvest centers that will further improve supply management in the agriculture sector, especially in times of natural disasters or when there is surplus in harvest.

“The imminent threat of natural calamities every year highlights the need for long-term solutions such as infrastructure investments that would improve flood control, water management and irrigation systems, reforestation, climate-resilient production and processing facilities, among others,” Chua said.

Chua also encouraged the continued use of climate-resilient varieties of seeds and technologies.

Nicholas Mapa, ING Bank senior economist, said with inflation seen to remain within target in the first quarter of this year, the policymaking Monetary Board will likely keep the policy rates unchanged.

Expecting that the previous rate cuts, totaling 200 basis points (bps), would help the recovery of the economy to pick up speed, the Monetary Board last month decided to maintain the key rates of the BSP.

The interest rate on the BSP’s overnight reverse repurchase facility remains at 2.0 percent after the previous meeting’s 25 basis point cut.

The interest rates on the overnight deposit and lending facilities were likewise kept at 1.5 percent and 2.5 percent, respectively.

“(BSP Gov.) Diokno indicated that the recent spike in prices would be transitory and that the central bank would aim to keep its policy stance accommodative given the ongoing pandemic. With the recent inflation reading, real policy rates are now -1.5 percent with BSP not likely to cut policy rates anytime soon,” Mapa said.

“However, Diokno did hint at a possible reduction to reserve requirements in the near term.