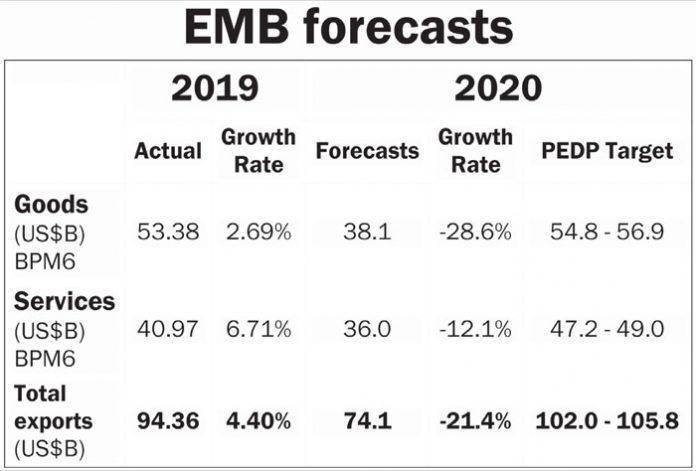 The Philippines is expected to be short by as much as $28 billion in its export target for the year, with receipts down by about 21 percent from a year ago due to the impact of the new coronavirus disease 2019.

“The challenge is, as we don’t want to change our targets, we want to change the strategy for us to meet our end-of-plan targets. If we give away 2020, we have to two years to make it to the end-of-plan,” said Perlada in a presentation to the regional consultations of the Export Development Council on PEDP.

The consultations are being done to review and assess the PEDP if the milestone targets are still achievable.

Perlada said EMB forecasts exports of goods to hit $38.1 billion, which is $16.7 billion short of the low-end of the PEDP target of $54.8 billion for the year.

Perlada said services is forecast to hit $36 billion, which is $11 billion short of the $47-billion low end of the PEDP target of $47 billion.

On an annualized basis, goods will drop 12 percent while services will fall 17 percent .

Those numbers align with the forecast of Oxford Economics which said exports will fall short about $20 billion this year.

Based on the assumptions of the Development Budget Coordination Committee, exports will drop 4 percent to $51.25 billion this year from $53.38 billion in 2019.

Sergio Ortiz-Luis Jr., president of Philippine Exporters Confederation Inc., in his speech at the consultations said exports in June dropped 13.3 percent to $5.33 billion from $6.15 billion in June 2019 due to the export decline in metal components and coconut oil, and machinery and transport equipment (-26.3 percent).

This was the fourth consecutive month of decline recorded for exports, but stronger than the 50.8 percent drop in April 2020, its highest recorded contraction since January 2009, and 35.6 percent in May. Electronics continue to lead exports, accounting for a hefty 59.6 percent of the total or $3.18 billion worth.

“Though still negative, we want to take this improvement in our export performance as a positive outcome of the relaxation of quarantine measures in certain economies, the gradual reopening of businesses, and the resumption of production in our country and that in our trading partners…the continuing exemption of exports and logistics from the measures should give stakeholders some breathing room. We had.. reports about recoveries in certain companies and sectors such as holiday decors and garments, both non-essential goods. We really hope that this momentum can be sustained,” Ortiz-Luis said.