The PSA reported that the country’s total export sales in July 2020 amounted to $5.65 billion from $6.25 billion a year ago, continuing to shrink but at a slower rate of 9.6 percent, from a 12.5 percent drop a month ago.

“The export earnings in July 2020 marked the fifth month in a row in which value of export contracted but the annual drop continued to weaken as it posted its third consecutive month of slower decline during the period,” the PSA said. 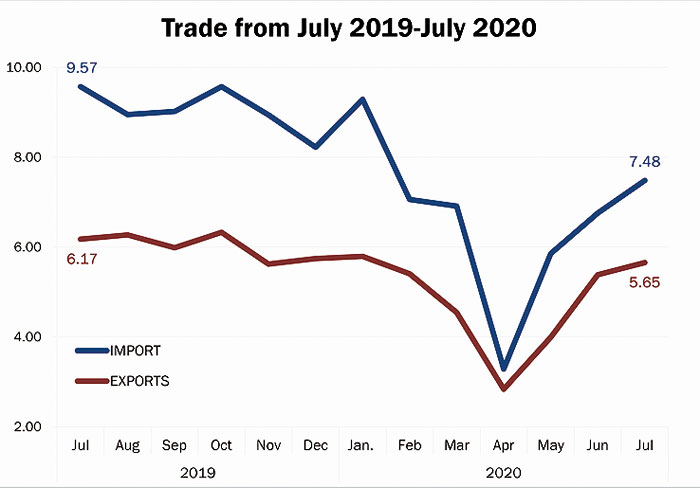 Meanwhile, total imported goods in July 2020, which amounted to $7.48 billion, remained at downtrend with an annual rate of 24.4 percent, from $9.89 billion in the same period last year.

“The value of imports contracted for the 15th straight month in July 2020,” the PSA said.

“In the previous month, the decline was slower at 23.1 percent, while in July 2019, imports decreased by 0.9 percent annually,” it added.

Thus, the balance of trade in goods in July amounted to -$1.83 billion, representing a trade deficit with an annual decline of 49.8 percent.

“The annual drop in trade deficit during the period was faster than the year-on-year decline in the previous month of 47.8 percent and in July a year ago of 9.3 percent,” the PSA said.

The country’s total external trade in goods in July 2020, which amounted to $13.13 billion, declined at an annual rate of 18.6 percent.

This was slightly lower than its previous month’s annual drop of 18.7 percent, the PSA reported.

Chua also said during the continuation of the Development Budget Coordination Committee’s virtual briefing before the Senate finance committee yesterday exports and imports are experiencing a gradual recovery during this pandemic-induced crisis.

“We do see, at least in the last three months, a U-shaped recovery of some of the variables like imports, exports labor force, and the manufacturing,” Chua said.

“Our recovery is slow but not as negative as before,” he added.

Chua said the government needs to sustain the gradual and calibrated opening of the economy while ensuring strict compliance to health and safety standards, to support the recovery and make the economy stronger and more resilient.

According to the NEDA chief, worker mobility is one of the critical elements that will help sustain the gradual and calibrated resumption of economic activities.

“We must emphasize the importance of safe and sufficient modes of public transport to allow workers to safely go to back to work and businesses to operate,” Chua said.

“Subsidies for service contracting need to be considered to incentivize transport owners and operators to operate even with a reduced passenger load,” he added.

He also said that the government will continue to pursue fundamental structural reforms jointly with its efforts to improve the country’s healthcare system.

“Reforms related to levelling the playing field such as liberalizing investment regimes to draw in capital and jobs, honing and improving innovative and forward-looking technologies, and producing competitive and unique products and services, remain in the government’s priority plan,” Chua said.

Chua emphasized that logistics reforms that will rationalize the freight system, establish strategic warehousing, as well as cold chain systems remain important as this will ensure the mobility of goods and complement efforts to improve production.