The United States Department of Agriculture (USDA) said the Philippines is set to become the second largest rice importer this year, next to the European Union, due to improved local production.

The Philippines has been the world’s top rice importer since 2019 when it brought 2.9 million metric tons (MT) and 2.3 million MT last year. 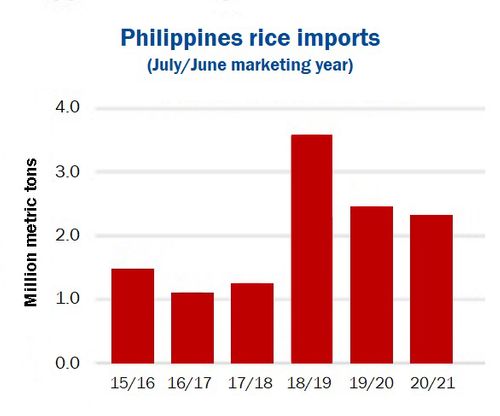 In its report, USDA said apart from better rice yield, higher prices and lower availability of exportable supplies from Thailand and Vietnam which both experienced drought, will contribute to lower rice imports for the year.

The USDA said the slowdown in the distribution of sanitary and phytosanitary (SPS) import clearances and the shortening of the time between the issuance of SPS licenses and shipment by the Philippine Department of Agriculture (DA) will contribute in tapering the country’s rice imports.

The DA said palay production for first quarter of the year is expected to hit 4.89 million MT, equivalent to 3.20 million MT of rice

The DA expects rice supply to be sufficient for 99 days by yearend.

Ahead of the release of official figures, the DA said that 2020 palay production reached 19.44 million MT, comprised of the actual production of 11.9 million MT from January to September and projected harvest of 7.54 million MT.