Members of the Semiconductor and Electronics Industries of the Philippines Inc. (SEIPI) are seeing a V-shaped recovery as they catch up to meet global demand while supporting local needs.

Glenn Everett, SEIPI chairman, said at the group’s general membership meeting last Friday, members have reported a 16-percent decline in sales although the projection is still a 20-percent contraction for 2020, a turnaround from a 5-percent growth estimate pre-new coronavirus disease 2019 (COVID-19). 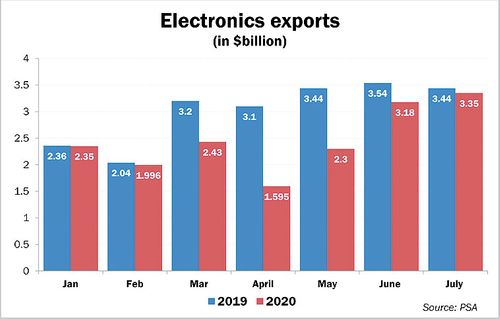 “Most companies surveyed reported some sort of V-shaped sales impact. Some are recovering quickly some recovering slowly over the course of things. We do not yet have a forecast for 2021,” Everett said.

Dan Lachica, SEIPI president, said in the same meeting he hopes revenues will improve over time because of global demand.

He said the push for repositioning of its members helps support and respond to the needs of the times.

Lachica said some of its companies like EMS have repositioned their factories to produce personal protective equipment while several multinationals are producing components for COVID- related products such as test equipment and the like.

Everett said as global household spending is restrained, “we see heightened uncertainty around … exports are expected to be hit hard.”

But he noted the Philippines has been participating in the production of components to support new technologies like wearables, an online geographic system for tracking, digital imaging, geotagging among others.

Lachica said SEIPI has set up a collaboration with the Semiconductor Fabrication Association Malaysia, the Malaysian government-owned Applied Research and Development Centre as well as the Alliance for Components and Systems of French Electronics to move up the value chain, possible fab setup consultancy, research and development, training, and technology transfer.

Everett said SEIPI continues to push for the passage of the Corporate Recovery and Tax Incentives for Enterprises (CREATE) bill which will grant a five-year moratorium on incentives, grandfather the current incentives, or grant of longer transition.

He said SEIPI hopes to convince lawmakers of “the dangers of raising taxes and reducing incentives for exporters… especially at this time when there’s such a health crisis impacting the economy. “

“We are all very vocal (that) CREATE actually becomes a law (as it) encourages exporters to locate, to choose the Philippines to be the center of their manufacturing base,” he said.