The economy continued to post a contraction in the third quarter of the year, albeit at a slower pace, as quarantine measures were reverted in major cities and provinces during the period, amid the coronavirus disease 2019 (COVID-19) pandemic.

The Philippine Statistics Authority (PSA) yesterday reported the economy posted a smaller decline of 11.5 percent in the third quarter from a contraction of 16.9 percent in the second quarter of the year.

Karl Kendrick Chua, National Economic and Development Authority (NEDA) acting secretary, said the contraction is not surprising given the return to more stringent quarantine measures in the National Capital Region (NCR) and neighboring provinces, and Cebu City, which together account for around 60 percent of the Philippine economy. 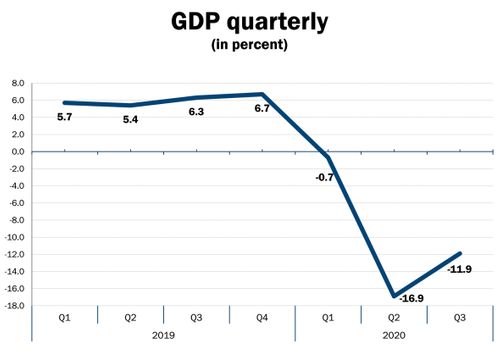 “The third quarter … saw the country dance with the virus: two steps forward and one step back,”Chua said in a virtual briefing. In August, NCR and neighboring provinces were placed anew to modified enhanced community quarantine (MECQ) for two weeks to stem the increase in COVID-19 cases. Earlier in June and July, Cebu City reverted to ECQ and then MECQ to improve its health system.

“Several other local government units also went back to more stringent quarantines to save lives. These actions gave us time to expand our capacity to deal with this contagion,” Chua said.

“Public transportation was restricted (which) prevented many Filipinos from leaving their homes and reporting for work even if their industries are allowed to operate,” he added.

But Chua noted the economy has begun to recover.

On a quarter-on-quarter basis the economy grew by 8 percent in the third quarter, “reflecting the return of economic activities as the quarantine was eased.”

“Given the policy changes and the further opening up of the economy and the policy not to revert to more stringent lockdown… the trend really is a further improvement in the fourth quarter, and hopefully we will begin to see better figures, or positive quarter growths, year-on-year quarter growth starting early next year,” Chua said.

The Development Budget Coordination Committee (DBCC) in July projected the economy to contract by 5.5 percent for the full year, or a contraction with a band of -4.5 percent to -6.6 percent.

However, Dennis Mapa, PSA undersecretary and national statistician, said in the same briefing yesterday the -5.5 percent projection for 2020 is no longer feasible.

“We need to grow about 6.6 percent in the fourth quarter to get an average of -5.5 percent,” Mapa said.

“The average growth for the first three quarters is -10 percent. The full year forecast of the government is -5.5 percent. At this point, that is no longer feasible,” he added.

On the supply side, agriculture growth slowed to 1.2 percent, as the sector faced a number of plant and animal diseases, Chua said.

These headwinds, however, had minimal effects on overall food supply as evidenced by falling food inflation in the same period, he added.

“Both industry and services also showed a smaller contraction (of -17.2 percent and -10.6 percent, respectively) consistent with the initial recovery of employment, where some 7.5 million workers returned in the third quarter. This reduced the unemployment rate to 10 percent in July from 17.7 percent in April, when the quarantine was at its strictest,” Chua said.

The PSA said industries that contributed the least to the gross domestic product (GDP) were construction, -39.8 percent growth; real estate and ownership of dwellings, -22.5 percent growth; and manufacturing, -9.7 percent growth.

“One of the things that we did differently in the fourth quarter is to change our policy from risk avoidance to risk management, and that is why starting October the Cabinet has approved policies to open up more of the economy,” Chua said.

But Chua said the impact of typhoons in the latter part of the year have been taken into account, with the actual impact being at a manageable level.

“In the fourth quarter, we saw four typhoons, two of them rather strong, so they will have an impact on the GDP. But unlike the COVID-19 pandemic, typhoons or natural disasters arising from typhoons are recurring events, which we have already internalized in our estimates, although sometimes the typhoons can become more destructive,” Chua said.
Damage is estimated at around P38.8 billion or 0.21 percent of GDP.

“When we put them all together, the impact on the country’s growth rate preliminarily is a reduction of around 0.055 percentage points so I think this is a manageable level. What is important is we fast track the recovery, so that more people will be reintegrated back after the disaster phase,” Chua said.

“These are being factored in, and the DBCC will be meeting immediately to reassess the latest numbers, to see if there is a need to adjust the full year projections,” he added.