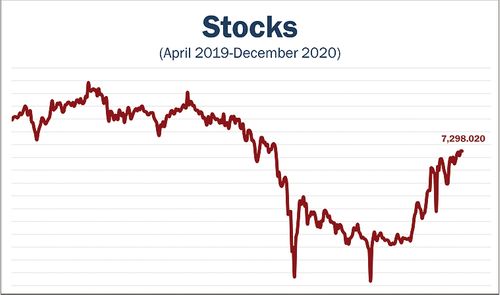 Earnings of listed companies fell by a median rate of 40.9 percent nine months into the year, according to online brokerage firm Colfinancial.com.

It said 49 of the 62 companies it monitors reported lower earnings, while 13 companies posted losses during the period in review.

Colfinancial.com said the companies’ weak earnings performance “was largely the result of the enhanced community quarantine (ECQ) which was implemented in Luzon and most parts of the country beginning mid-March up to mid-May to contain the spread of COVID-19 infections.”

“Although restrictions were eased in the middle of May, operations of most companies were still below normal as several restrictions remained in place during the third quarter and as consumers stayed cautious,” it added.

“Although profits of telcos were down, the median drop was only 2.3 percent as demand for data services (led by home broadband) remained strong. All other sectors reported double digit declines in profitability, with restaurants being the worst hit as all three restaurants that we cover reported losses,” Colfinancial.com said.

It said earnings recovered for most companies as a large part of the country transitioned out of ECQ during the second quarter to the general community quarantine during the third quarter, allowing most businesses to operate at a higher capacity and for consumers to increase mobility.

Banks’ profit for the nine-month period dropped a median rate of 13.4 percent, given their higher provisioning as they anticipate an increase in bad debts.

“The office segment was the industry’s only bright spot as operations remained normal despite the pandemic,” it added.

Earnings of consumer companies also dropped by a median rate of 37.5 percent with profits largely down as restaurants and retailers suffered from weaker sales
Retailers’ profits dropped sharply with median profits down 31.9 percent.

“However, losses narrowed compared to the second quarter amid a rebound in demand brought about by the easing quarantine restrictions. Meanwhile, home improvement stores enjoyed a V-shaped recovery in sales when stores reopened in the third quarter, significantly trimming the decline in profits for the first nine months of the year,” it said.
Consumer goods manufacturers grew their profits with the median up by 7.2 percent, Colfinancial.com said.

Colfinancial.com noted the 6.4 percent drop in power demand in the third quarter, still due to the negative impact of the COVID-19 pandemic on economic activity.

“On the positive side, the drop was much slower compared to the 17.5 percent decline registered in the second quarter. For the nine months, power demand was down by 7 percent,” it said.