Trade Secrertary Ramon Lopez favors a “bit of weakness” of the Philippine peso to boost exports and expressed hope the currency goes back to 50 to the dollar.

Lopez in an interview with CNBC over the weekend said he is comfortable with the current level of the currency but “if we can only allow a bit of weakness so it can help our export market….(the peso)  will somehow find a better balance and hopefully back to the P50 level where we were before and that will be well for the export sector.”

This was his reaction when told by CNBC the peso, based on projections, could appreciate even 46 or even 45 at the end of the year. 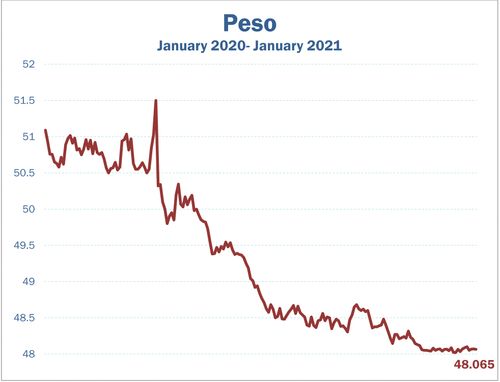 “We are just basically letting the market dictate the movement in currency. The Bangko Sentral ng Pilipinas is there to provide a level of stability, more or less, and managing any drastic movement. The important thing is allowing the market place and as the economy improves, we will expect more imports and more demand for foreign exchange,” Lopez added.

“Obviously exporters would want to have a slightly weaker Philippine currency. But we expect with the rebound of the economy… since we are an import dependent country, from oil to many others…we expect that once the economy picks up much faster, importation will come in,” Lopez said.

He added this might “sort of balance the current appreciation of the peso.”

Lopez expressed  confidence the Regional Comprehensive Economic Partnership (RCEP) will help achieve that balance as the 68 percent of the Philippines’ imports are coming from  RCEP countries.

“With the recent signing of RCEP, it will basically allow us to a greater access to imported inputs and at the same time open up other markets. (Imports) will definitely come back,” Lopez said.

When asked on the possibility of concluding Comprehensive and Progressive Agreement for Trans-Pacific Partnership (CPTPP) with the United States  on board, Lopez said even with RCEP just signed, the Department of Trade in Industry islooking into a possible participation on the CPTPP.

“Our intention really is to look into that regional bloc so that we can also benefit from a freer global trade bloc that CPTPP has,” he said.