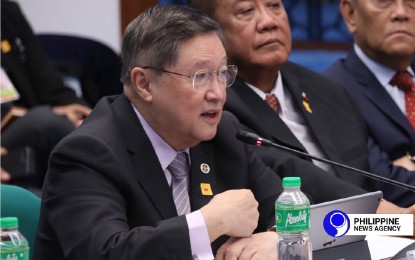 By Ashzel Hachero and Angela Celis

The Department of Finance (DOF) said that it will honor the temporary restraining order (TRO) issued by the Supreme Court (SC) on the five percent franchise tax on all bets collected by Philippine Offshore Gaming Operations (POGOs), that was meant to provide additional funding for the anti-coronavirus disease 2019 (COVID-19) efforts.

Carlos Dominguez, DOF secretary, was asked in a Viber group with reporters to comment on the SC’s ruling that stops the government from collecting the said franchise tax on POGOs’ gross gaming revenues.

“We will respect the TRO,” Dominguez said.

Tax chief Caesar Dulay was also sought for comment, but he has not responded, as of press time.

A court insider said the SC voted 13-1, and only associate justice Marvic Leonen dissented from the majority ruling which would prevent the Bureau of Internal Revenue and the DOF from collecting the said franchise tax.

The SC though has yet to issue an official statement on the ruling.

It can be recalled that lawmakers pushed for the collection of the five percent in franchise tax to boost revenue collections while also helping efforts to address COVID-19.

Senate minority leader Franklin Drilon earlier said that a provision in Bayanihan To Heal As One Act 2 imposes a five percent franchise tax on bets received by POGOs or from the predetermined minimum monthly revenues from their operations, whichever is higher.

Drilon said in September that the Bayanihan 2 will more than double the tax collection from POGOs, from P7 billion estimated collection in 2019 to approximately P17.5 billion in 2020 because of the reforms introduced in the measure.

But the court insider said the justices saw the provision as a “rider” which means that it is violative of the constitutional provision prohibiting laws or regulation that embrace more than one subject that should be expressed in its title.

President Duterte signed the Bayanihan 2 last September 2020 and congress extended its validity until June 30 this year.