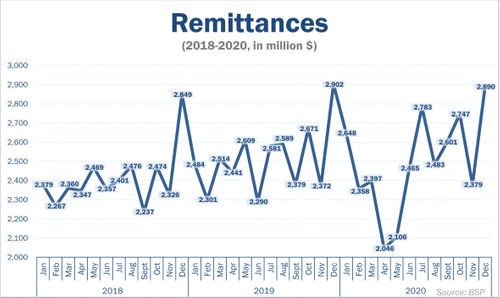 Overseas Filipinos found a way to send money to their families last year, despite lockdowns, repatriations and threats to health, as full-year flows of remittances fell by less than 1 percent from the previous year’s level.

BSP attributed the slight decline to the 0.7 percent decrease in remittances from land-based workers with work contracts of one year or more to $2.494 billion from $2.512 billion recorded in December 2019.

Remittances, according to economists, have become the single most important source of foreign exchange to the Philippine economy and a significant source of income for recipient families.

This is actually at par with the 2019 remittance total of $30 billion as those accounted for 9.3 percent and 7.8 percent of GDP and GNI, respectively.

As OFWs were repatriated and displaced due to the coronavirus pandemic, BSP said in June last year that remittances were likely to contract by 5 percent.

OFWs were widely employed in economies that have been badly affected by the global health crisis, including the United States, United Kingdom, Euro area, Japan and countries in the Middle East.

The 2020 contraction, albeit small, is the first year in two decades that remittances posted a decline. The last time was in 2000 due to the Asian financial crisis in late 1990s.
But Diokno said the decline in remittances is “expected to be temporary.”

The combined remittances from these countries accounted for 78.6 percent of the total cash remittances.

Nicholas Mapa, ING Bank Philippines senior economist, said while OFWs managed to send home much-needed funds despite the challenges faced on the economic and health front, remittances may be losing its punch.

“For all the heroics displayed by our modern day heroes, we do note the fading punch packed by once very potent FX flows from abroad. We note that adjusted for exchange rate movements, remittances are actually down more substantially than the 0.8 percent recorded by the BSP,” Mapa said.

He said in peso terms, remittances have actually contracted by 4.8 percent despite OFs struggling to find a way to send home more dollars to pay for fixed peso expenditures such as tuition or mortgage payments.

Simply put, a $100 remittance in 2020, when converted to peso, is P200 less than that of the previous year. On the average, Mapa said OFWs send $500 a month to their families here.

“The remittance safety valve is further challenged with up to 420,000 OFs repatriated due to job losses in their host countries, cutting off the steady stream of $500 usually sent home by each OF to their families back home,” Mapa said.

Given their expectation for only a mild appreciation trend for the peso this year, Mapa said they expect remittance flows to remain flat in 2021 “with the return of sea-based OFs helping offset the substantial number of OFs sent home over the course of 2020.”

“Meanwhile, with vaccination rollouts ongoing across the globe, job prospects may brighten for OFs in the coming months which will be crucial in supporting sagging domestic incomes due to severe job losses and poor consumer confidence,” Mapa said.