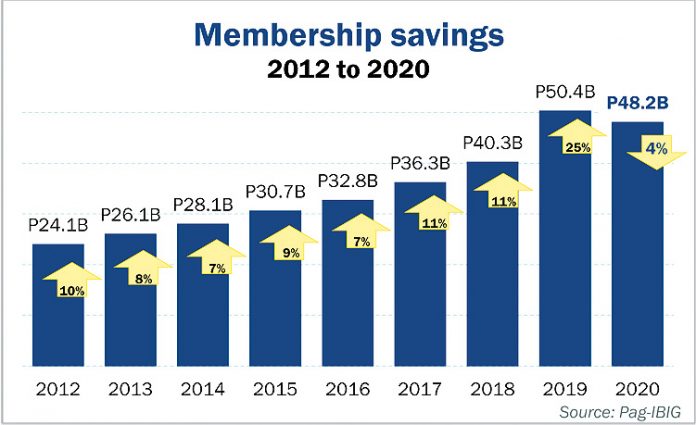 By Irma Isip and Angela Celis

The Home Development Mutual (Pag-IBIG) Fund reported lower income in 2020 due to the impact of the pandemic on its operations.

But despite this, the Fund is allotting the record proportion of its net income as dividends, at 93.68 percent which would be credited to the savings of its members.

In his Chairman’s Report made available in a virtual event, Eduardo del Rosario, said the Fund recorded a net income of P31.18 billion in 2020. This is 9 percent lower than the P34.37 billion recorded in 2019.

Pag-IBIG in 2020 rolled out relief measures including grace period on loan payments, promotional interest rates on housing loans, higher financing line for developers, among others to help members and partners cope with the financial difficulties posed by the new coronavirus disease 2019 and to stimulate demand.

The Fund missed P100-billion goal of housing loan takeouts for the year.

Meanwhile, Carlos Dominguez, Department of Finance secretary, cited PAG-IBIG’s accomplishment in 2020 of providing easy-to-pay housing loans to close to 17,000 of its members from the minimum-wage and low-income sectors, and the Fund’s high-earning MP2 Savings Program that encourages its members to save and earn more from their contributions.

Dominguez also congratulated Pag-IBIG for reaching an all-time high of P12.11 billion on its housing loan disbursements in a single month in December last year, which benefited 12,275 members, “We look forward to new records that the agency will achieve this year.

The housing program is a key component in our economic recovery strategy. This should help create more jobs in the construction sector,” said Dominguez said Pag-IBIG’s voluntary MP2 Savings Program, which generated a record P13.3 billion in savings from its members last year despite the pandemic, adds to the government’s efforts to open up more investment opportunities for Filipinos, Dominguez said.The P13.3 billion saved by members under the MP2 program also represents an 11 percent increase from the savings in the previous year.