The recent implementation of a two-week modified enhanced community quarantine (MECQ) in Metro Manila and other economic centers pushed the full-year performance of the economy closer to the worse end of the government’s projection, according to Karl Kendrick Chua, acting socioeconomic planning secretary. 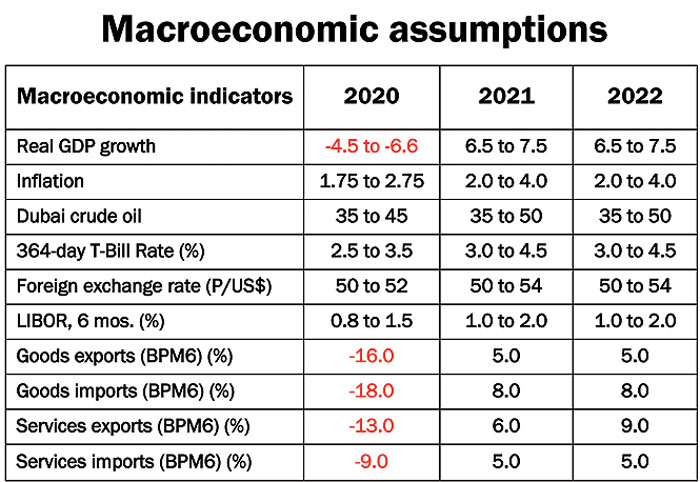 However, a gradual recovery can be achieved as the economy quickly responds to policies that are being put in place, said Chua, who heads the National Economic and Development Authority.

Chua said during the Development Budget Coordination Committee’s virtual briefing before the Senate finance committee yesterday the country’s gross domestic product (GDP) growth rate for 2020 is projected to be around negative 5.5 percent, or a contraction with a band of -4.5 percent to -6.6 percent.

“Admittedly when we had the two weeks MECQ, we are pushing actually the numbers towards the -6.6 percent,” Chua said.

Quarantines and the economy

To recall, Metro Manila as well as Bulacan, Rizal, Cavite and Laguna were placed on MECQ, from the more relaxed general community quarantine status, from August 4 to 18 to boost the capacity of the healthcare system as coronavirus disease 2019 (COVID-19) cases then continued to rise.

However, Chua also cited the recent employment figures for July which showed general improvements from April, as quarantine restrictions were mostly eased.

“It really depends on the policy stance that we put, and so long as we do not have a U-turn we have a gradual recovery and relaxation… then, I think the (projected) range is still possible but as I mentioned, this is a period of uncertainty,” Chua said.

“So the moment we see changes in the monthly data, we will do the revision but so far the U-turns are all ongoing up,” he added.

Chua said the budget operates for now on the up to 6.6 percent projected contraction for the year.

“Now, if there is a significant change in the GDP then the budget, of course, will have to be recalibrated, and that is why we are proposing a phased and adaptive approach, because this is really unprecedented uncertainty, so we’ll have to be more flexible as needed,” he said.

Chua also explained in his opening presentation that during the last six months, the lower quarantine restrictions have opened more sectors of the economy and are helping bring back jobs.

“All in all, between April and July 2020, 7.5 million jobs were restored to the economy. All of these suggests that our economy is very strong and will respond rather quickly to the policy that we put in place,” Chua said.

“All these suggests that the quarantine restriction will have a significant impact on the rest of the year,” he added.

Chua said the government will remain vigilant against the risks to the outlook.

On the domestic front, he identified the following as key risks: the uncertainties brought about by the COVID-19; subdued consumer and business confidence; the weather disturbance, possibly because of La Niña starting in the fourth quarter of this year; animal borne diseases such as the African swine fever; disruption in transport value chain and logistics; limited absorptive capacity of implementing agencies to implement, for instance, the Bayanihan 2; and possible labor market disruptions.

From the external side, Chua mentioned the expectation of a weaker global economy; the geopolitical tensions, particularly around the United States and China; and the lower remittance that will affect the country’s GDP and macroeconomic performance.

“We are responding in the government with phased and adaptive recovery approach that prioritizes health, because this is primarily a health issue, and then recovery of consumer confidence,” Chua said.