The World Bank has revised its forecast for the Philippines’ economic performance as it expects the economy to shrink by 8.1 percent this year, worse than its previous projection of a decline of 6.9 percent.

The Washington-based agency also said, as it released its Philippine Economic Update yesterday, the expected growth contraction in 2020, along with the subsequent pressure on household income, is likely to increase poverty in the short term.

Specifically, it said there will be an additional 2.7 million poor people in 2020 compared to 2019 estimates, based on the World Bank poverty line of $3.2 a day.

“With the economy contracting and household income declining, poverty is estimated to increase from 20.5 percent in 2019 to 22.6 percent in 2020 (measured against the lower middle-income poverty line of $3.2/day), reversing the trend of a steady decline in poverty in recent years,” the World Bank said in its report.

“As the threat of the coronavirus disease 2019 (COVID-19) pandemic dissipates and business activities gradually return to normal, the economic recovery is expected to contribute to poverty reduction. The poverty rate is projected to fall to its 2018 level in 2021 and keep falling throughout 2022,” it added.

The World Bank cited the multiple shocks that hit the Philippines for its recent forecast, specifically the COVID-19 health crisis, economic activities across the country frozen by quarantine measures, devastating typhoons in November and the global recession.

Sustained improvements in managing the pandemic and a possible rebound in the global economy, however, can help the country recover in 2021 and 2022, the Washington-based agency said. 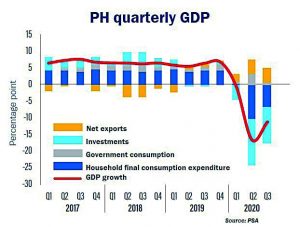 “The series of natural disasters that hit the country while we are battling the pandemic highlights the importance of mainstreaming disaster risk reduction and climate change adaptation into policy and planning,” Ndiame Diop, World Bank country director for Brunei, Malaysia, Thailand and the Philippines, said in a statement yesterday.

“While the Philippines is financially resilient, stronger coordination, execution and implementation will help further improve social and physical resilience to frequent shocks,” he added.

Typhoons Rolly, Siony and Ulysses that hit the country in November in just a span of two weeks have brought devastation to a large part of Luzon, further darkening this year’s growth outlook, the World Bank said.

Prior to these disaster events, the economy had already posted a 10 percent contraction in the first three quarters, the worst since the 1985 debt crisis, amid the ongoing pandemic.

The World Bank expects the Philippines to recover in the next two years, assuming continuing improvements in bringing down virus transmission.

“Policy makers are gradually allowing more industries to resume operations, thus reviving jobs and incomes, and boosting private consumption. This will help the economy bounce to a 5.9 percent growth in 2021 and six percent in 2022,” the multilateral agency said.

“Speeding up reforms that improve the business environment, foster competition, and strengthen resilience against natural disasters will support the economic recovery and boost productivity growth in the long term,” she added.

The World Bank said in its report the current forecasts hinge on China’s early recovery, alongside the expected rebound in the global economy in 2021, which will allow for export growth to recover, and larger remittance inflows to stimulate domestic demand.

The government is expected to ramp up its infrastructure spending starting in the fourth quarter of 2020, creating jobs in the construction sector. Pre-election activities in the run-up to the national election in 2022 will give an additional boost to demand as early as in the second half of 2021, it added.

The report however said the growth outlook for the Philippines faces significant downside risks, primarily from a potential resurgence in COVID-19 cases exacerbated by the negative impact of frequent natural disasters on economic activities.