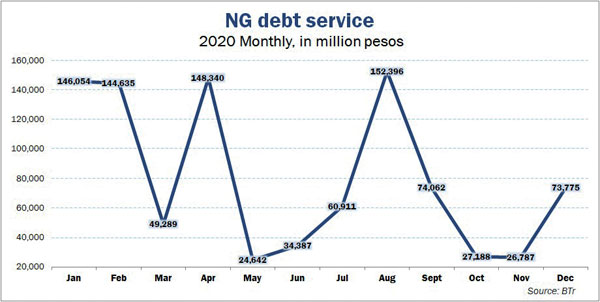 The national government’s debt payments rose by 14.25 percent in 2020, data released by the Bureau of the Treasury (BTr) showed.

According to data posted on the BTr’s website, the debt settled last year went up to P962.47 billion from the P842.45 billion paid out in the same period in 2019.

The figure for 2020 is within the programmed debt service expenditures for the year of P1 trillion.

Of the total amortization made during the period, P440.4 billion was used to pay local lenders while P141.65 billion was spent to settle foreign obligations.

Of the said amount, P279.06 billion was paid to domestic creditors while P101.34 billion was for international debt.

The Department of Budget and Management said in a document on its website interest payments were short of the program by P40.9 billion or 9.7 percent due to lower actual foreign exchange and interest rates, which in turn generated savings that partially helped fund the requirements of the Bayanihan II.

For this year, debt service payment is expected to rise to P1.79 trillion. The lion’s share will be for principal payments with P1.26 trillion, while the remaining P531.55 billion will be for interest payments. – Angela Celis

Return the favor: South Korea looks to US for COVID-19 vaccine...