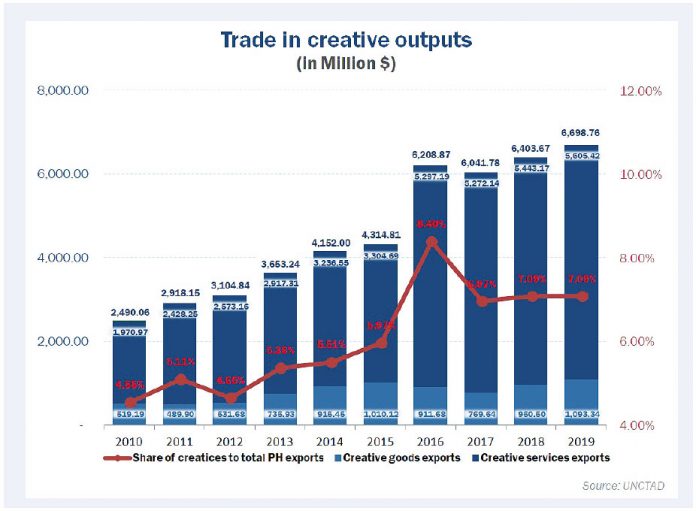 The Philippines expects the creative industry to be one of the key drivers of Philippine trade in the coming years.

But the pandemic has also severely crippled the industry which is estimated to lose 90 percent of its business in the short-term.

In her presentation at the Special Legislative Reform Discussion Series hosted by the American Chamber of Commerce and Industry yesterday, Trade Undersecretary Rafaelita Aldaba said the Philippines in Asean ranked first in creative services exports and fifth in total creative exports based on UNCTAD data between 2016 and 2019.

Around 83 percent of the Philippines’ creative exports are in services, thanks to the information technology and business process management industry and computer service, which accounted for 81.7 percent.

Aldaba said the Philippines also noted an increase in the export of design products driven by artisanal and professional services.

“We have seen a modest increase in the momentum of our creative exports driven by the outstanding growth of the creative goods sector. We are also seeing growing relevance and contribution of the sector, (which is) poised to become a key driver of Philippine trade in the coming years,” said Aldaba.

“These offered productivity and revenue losses due to canceled contracts,” she said.

Quoting estimates of the Creative Economy Council of the Philippines, Aldaba said the industry would suffer up to 90 percent revenue losses due to the health crisis that has turned into an economic crisis.

Aldaba also quoted the I Lost My Gig website which said a total of 5,549 projects were lost, affecting 4,458 people, and income losses amounting to P268 million.