With just a month to go before the year ends, vehicle sales continue to fall in November to 23,162 units, down 7.4 percent from 25,023 units sold in October. 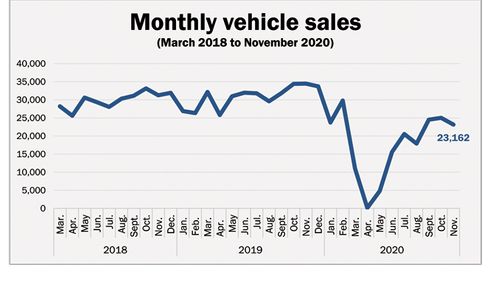 A joint report by the Chamber of Automotive Manufacturers of the Philippines, Inc. (CAMPI) and Truck Manufacturers Association yesterday showed total sales for January to November stood at 196,19 units, down 41.6 percent from 336,226 units in the same 11-month period in 2019.

CAMPI president Rommel Gutierrez attributed the modest slowdown to the consecutive typhoons that badly hit the regions of Bicol, Central Luzon and the National Capital Region, among others in November, which resulted in a negative growth anew.

Cumulative sales from these regions have declined by 8.3 percent compared with the previous month.

“We remain optimistic in sustaining this level of sales performance for this month, which is critical for the industry to achieve its sales forecast,” Gutierrez said.