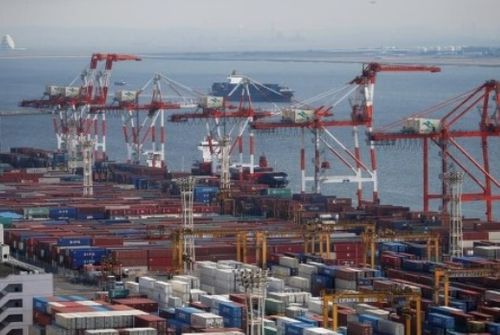 TOKYO- Japan’s economy grew at the fastest pace on record in the third quarter, rebounding sharply from its biggest postwar slump, as improved exports and consumption helped the country emerge from the damage caused by the coronavirus pandemic.

However, analysts painted the sharp bounceback as a one-off from the depths of recession, and cautioned that any further rebound in the economy will be moderate as a resurgence in infections at home and abroad clouds the outlook.

The world’s third-largest economy expanded by an annualized 21.4 percent in July-September, beating a median market forecast for an 18.9 percent gain and marking the first increase in four quarters, government data showed on Monday.

It was the biggest increase since comparable data became available in 1980 and followed a 28.8 percent plunge in the second quarter, when consumption took a hit from lock-down measures to prevent the spread of the virus.

“The strong growth in July-September was likely a one-off rebound from an extraordinary contraction caused by the lockdown steps,” said Yoshiki Shinke, chief economist at Dai-ichi Life Research Institute.

“The economy may not fall off a cliff. But given uncertainty over the outlook, I would err on the side of caution in terms of the pace of any recovery,” he said.

The rebound was driven largely by a record 4.7 percent surge in private consumption, as households boosted spending on cars, leisure and restaurants, a government official told a briefing.

External demand also added 2.9 percentage points to gross domestic product (GDP) growth thanks to a rebound in overseas demand that pushed up exports by 7.0 percent, the data showed.

But capital expenditure fell 3.4 percent, shrinking for a second straight quarter in a worrying sign for policymakers hoping to revitalize the economy with private-sector spending.

Economy Minister Yasutoshi Nishimura said the economy still had over 30 trillion yen ($287 billion) of negative output gap, or spare capacity, part of which must be filled by a new stimulus package now in the works.

“We can’t make up for all of the output gap just with public works spending. We also need to spur private investment. But the size (of the output gap) is something we’ll look at” in compiling the new spending package, he told a news conference.

A negative output gap occurs when actual output is less than the economy’s full capacity and is see as a sign of weak demand.

Without additional stimulus, Japan may experience a fiscal cliff next year as the effect of two big packages deployed earlier this year – worth a combined $2.2 trillion – peter out.

Prime Minister Yoshihide Suga has instructed his cabinet to come up with another package, which analysts say could be sized anywhere between 10-30 trillion yen.

“Nishimura’s remark on the 30-trillion-yen output gap suggests the size of the new package would come by as much,” said Takeshi Minami, chief economist at Norinchukin Research Institute.

The Bank of Japan is also expected to extend its corporate funding programme beyond its March deadline, with a decision expected next month or January, analysts say.

Despite some signs of improvement in recent months, analysts expect the world’s third-largest economy to shrink 5.6 percent in the current fiscal year ending in March 2021 and say it could take years to return to pre-COVID levels.