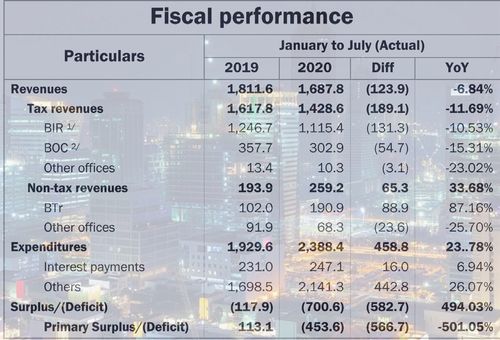 The national government’s budget deficit in July widened to P140.2 billion, as expenditures surged while revenues fell amid the coronavirus disease 2019 (COVID-19) pandemic.

The Bureau of the Treasury (BTr) said in a statement yesterday the budget shortfall in July rose by 86.21 percent from the P75.3 billion deficit posted a year ago.

“The higher deficit for the month reflects the 10.4 percent growth in government expenditures, boosted by the implementation of various COVID-19 rehabilitation and recovery measures vis-à-vis an 11.22 percent drop in revenue collection,” the BTr said.

The BTr said the deficit-to-gross domestic product ratio for the first half of the year stood at 6.52 percent, compared to 0.46 percent last year, due to the combined fiscal and economic impact of the COVID-19 pandemic.

“Expenditure effort, on the other hand, significantly improved to 23.42 percent relative to the first semester of 2019’s 17.14 percent,” it added.

The BTr reported that government revenues for July fell by 11.22 percent year-on-year to P234.5 billion from P264.1 billion, due to the adverse impact of the health crisis on economic activity.

On a year-to-date basis, total collection stood at P1.69 trillion, also down by 6.84 percent from the previous year’s outcome of P1.81 trillion.

The Bureau of Internal Revenue’s (BIR) collections for the month amounted to P159 billion, declining by 11.84 percent over last year’s level of P180.3 billion.

Similarly, the BIR’s resulting cumulative collection of P1.12 trillion for the first seven months of the year represented a 10.53 percent year-on-year contraction from P1.25 trillion.

The Bureau of Customs (BOC) raised a total of P49.8 billion for July, 8.84 percent lower compared to the P54.6 billion achieved in the same month a year ago, which the BTr said was weighed down by disruptions to trade caused by the lockdown.

This trimmed BOC’s aggregate collection as of end-July to P302.9 billion, 15.31 percent lower from the prior year’s total of P357.7 billion.

July income generated and collected by the BTr amounting to P7.6 billion was 46.74 percent slower from the previous, due to the early remittance of dividends this year as well as lower national government share from the Philippine Amusement and Gaming Corp. and interest earned from government deposits which declined by P2.6 billion year-on-year.

The BTr’s cumulative revenue for the seven-month period, on the other hand, grew by 87.16 percent to P190.9 billion and already exceeded the original full-year target of P82.3 billion by more than P108.6 billion, contributed by higher dividends and other government service income.

The P14.6 billion collections from other offices, such as other non-tax revenues including privatization proceeds and fees and charges, was up 12.43 percent over last year, which the BTr said was partly due to the payment of P4.3 billion concession fees made by MPCALA Holdings Inc. for the Cavite-Laguna expressway project.

The year-to-date collection of P68.3 billion, however, is still lower by 25.7 percent relative to 2019’s level, the BTr said, because of the restrictions to some economic activities as well as government operations caused by the ongoing COVID-19 pandemic.

Meanwhile, the national government’s disbursements for July rose 10.4 percent to P374.7 billion, from the P339.4 billion posted a year ago, driven by the second tranche releases for the Social Amelioration Program and other COVID-19 related expenditures, the BTr said.

Likewise, the cumulative spending of P2.39 trillion notched a double digit-growth of 23.78 percent from the January to July 2019 figure of P1.93 trillion.

NCAA conducting survey on vaccine use