The information technology-business process management (IT-BPM) industry, has evolved to a work-from-home arrangement and retained its productive strength.

But while the industry continues to generate investments and to drive real estate takeup despite the changing work models, the head of the Information Technology Business Process Management (IT-BPM) remains cautious.

“The worst is not over. And while we have performed better than many other industries… we recognize that we are not yet out of the woods,” Rey Untal told a webinar on Philippine

IT-BPM Industry: Your Tool for Business Recovery and Continuity hosted by the Department of Trade and Industry in Australia last Friday.

Untal said before the enhanced community quarantine (ECQ) was imposed in Metro Manila, work-from- home was not even 10 percent for the industry. 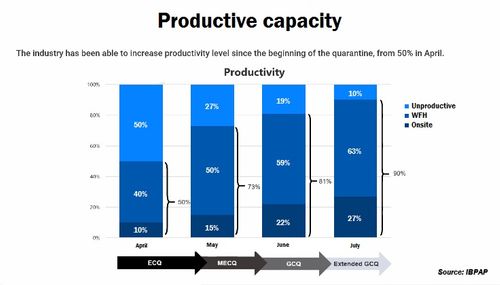 “But within a period of five days we were able to mobilize 40 percent of our workforce to move to a work-from home arrangement,” he said.

Currently, that proportion is anywhere between 65 and 70 percent.

Untal sees the industry shifting from what used to be predominantly an in- office operation to a blended setup of work-from-home and work- at- office.

Ironically, while bulk of workers are working from home, Untal said the IT-BPM remains to be a fundamental catalyst of the office sector.

He said from the first and second quarters, new leases increased by close to 50 percent or about 77,000 square meters (sq.m.)

Though that is much lower than what it used to be, Untal said that level is high as about 42,000 sq.m. had been absorbed by the it BPM sector.

Untal said the IT- BPM sector also continued to hire despite the health crisis citing a Jobstreet report which said that from March to September, the industry has been one of the top hiring industries.

He also cited data from the Philippine Economic Zone Authority which showed approved investments in IT-BPM rose 37 percent to P11.4 billion in the first seven months of the year. — Irma Isip

NGCP appeals for cooperation of land owners for line repairs

Biden to assume US presidency amid deep divisions, raging pandemic