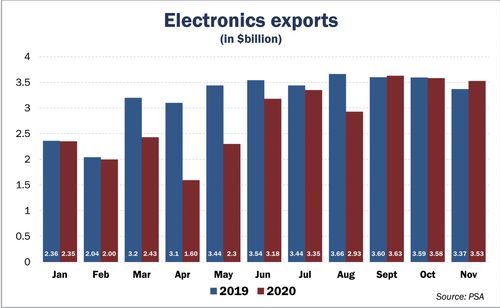 The Semiconductor and Electronics Industries of the Philippines Inc. (SEIPI) is optimistic of a rebound in exports this year, back to 2019 level, from last year’s softer contraction as demand in the global market returns.

Last year’s expected contraction is lower than the earlier projection of the group of 20 percent. As of end November, exports stood at $35.8 billion of exports, of which 70 percent is semiconductors.

He admitted there has been a shortage on automotive electronics triggered by the shutdown, if not the impairment of the supply chain early in March to April.

“But since then, we’re starting to recover,” he said, citing local players Texas Instruments, Amkor, ON Semiconductor, Maxim Integrated and Analog are providing components for the automotive industry

“Demand has recovered. It’s probably increasing to address the needs of the times, for example, the need for distance learning or working from home. of that is in semiconductors. We hope to close the year (2020) at around $39 billion, $40 billion of exports,” said Lachica, but noted supply chain has not normalized due to the pandemic.

“But certainly the industry is doing its best to augment its capacity, so we can provide the needs of the global market, whether it’s automotive, medical electronics or industrial, commercial products,” Lachica told Market Edge..

Lachica also said there may be some expansion projects but hardly any new investments, as Vietnam is garnering most of the foreign direct investments.

Lachica said the Corporate Recovery and Tax Incentives for Enterprises, once enacted, would be helpful for domestic enterprises as this would reduce the corporate income tax rate.

However, he hopes the final version would introduce some tweaks or adjustments to be more favorable in attracting investments. “

“We’re still concerned about, you know the lower cap (for) PEZA-IPA (Philippine Economic Zone Authority-investment promotion agencies) approval of investments. We’re glad the tenure transition period was granted. We’ll have to see but I think it’s not going to be enough to, because we have to be competitive given our high operating costs. We have to be competitive with Vietnam and incentives is one way to offset their high operating costs,” Lachica said.

The cap for which PEZA or an IPA can approve investments is currently set at P1 billion which Lachica said is too small.

“That’s only $20 million. And historically expansions and new investments have been around 100 million dollars or roughly about P5 billionWe’re hoping to approach that number, so that you can have more efficient and quick approval by PEZA and IPAs for that matter,” he said.