Street dining is back in Makati and Bonifacio Global City (BGC).

The Makati Street Meet revived al fresco dining on Rada and Leviste Streets in Legaspi and Salcedo Village, respectively, closing both streets to traffic on Valentine’s Day and on February 28 – all within the bounds of the health and safety protocols of the city.

Circuit Makati hosted the Riverside Sessions – dining by the riverside, musical performances by a violinist and a saxophonist, and on-the-spot sessions with a caricaturist.

In BGC, under the My Street High Street program, portions of 5th avenue go car-free every Saturday and Sunday for outdoor activities and dining. Fresh vegetables and produce from displaced farmers of the Benguet Collective are also made available on weekends.

The Makati events are the initiative of Ayala Land, Make It Makati, and MACEA (Makati Central Estate Association Inc.).

Consumers turn to Super Minimart as transition to ‘normalcy’ continues

The country has experienced quite a lifestyle shift that made people wary of going out too far from their homes. 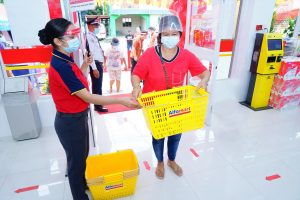 “I try not to go far, or to any places that may be crowded, when I have to shop for our household needs,” said Beverly, a household helper in a Quezon City subdivision. Beverly is employed by a senior citizen couple so she cannot go off too far and risk infection. “Fortunately, we have an Alfamart here inside the subdivision; walking distance from the house. That’s where I tend to shop nowadays,” she continued in Filipino.

“We thought the [Alfamart] was just a convenience store, but over the pandemic we discovered that it does provide other items like meat, fish, and many other household needs,” she said.

Minimarts have become a welcome convenience to communities, especially during the pandemic. According to Alfamart, the first and only Super Minimart chain in the Philippines, while there has understandably been less foot-traffic in their stores, the amount of items purchased per customer has increased.

“As we continue to expand beyond our 1000-store milestone, we will have more in store for our customers, our suppliers, our lessors, and each and everyone of our partners,”  said Alfamart Philippines COO Harvey Ong, adding that their employees needed to be safe to continue their work of serving their communities.

AEV received a two-arrow recognition (ACGS score of 90-99points), while AboitizPower, one arrow (ACGS score of 80-89points) from domestic ranking body Institute of Corporate Directors (ICD) following the results of the 2019 ACGS assessment.

Both AEV and Aboitiz Power have consistently  been recognized as among the best managed companies in the Philippines and top 50 best performing PLCs in the ASEAN region in the last few years.

AboitizPower has also been recognized as a constituent company in the FTSE4Good Index Series created by global index provider FTSE Russell, which measures the performance of companies demonstrating strong ESG practices. #

As the football 2020/2021 season heats up, Rakuten Viber is kicking off a new chapter of its longtime partnership with FC Barcelona by offering fan-first experiences for the club’s supporters.

The messaging app and the club are also launching an official global FC Barcelona Community in Russian, in addition to other Communities in English, Spanish, and Arabic. Viber is also launching a brand new FC Barcelona  sticker pack to kick off the new football season.

The LEGO Group first partnered with Ban Kee as a local distributor in 2019 and further strengthened their partnership at the start of 2021 when the toy brand turned over management of its LCS branches to Ban Kee.

Ban Kee offers a variety of toy selection by different brands such as Intex, LeapFrog, Gundam, and Beyblade among others.

LEGO is partnering with leading loyalty program provider ZAP to establish its own membership program. Starting March 1, members can earn points for every P100 spent and enjoy other benefits depending on their tier.

The SM Group scored stellar wins in two of the most prestigious awards in the field of public relations with a strong showing at the 56th Anvil Awards and the 18th Philippine Quill Awards taking more than 30 recognitions for its exceptional communication and social good programs in 2020.

SM Group will be receiving 25 awards at the International Association of Business Communicators Philippines’ Quill Awards after being shortlisted in several categories in two divisions. The virtual awarding ceremonies are tentatively scheduled this March.

Realestateasia.com, the B2B website for the real estate industry, has launched the inaugural Real Estate Asia Awards to recognize best-in-class property developers for their projects and initiatives in the region, and to help give the pandemic impacted industry a much needed boost.

Nominations are open until March 19 and winners will be announced on April 15.

“The unforeseen circumstances brought upon by the pandemic has greatly impacted the real estate sector, from project developments and construction right to sales operations. Travel bans and lockdown measures have also affected the industry players as transactions were put on ice due to the crisis. Now more than ever, developers and investors alike must remain resilient in order to thrive amid these testing times,” said Tim Charlton, CEO of Realestateasia.com.

These awards will be peer judged and aim to improve the quality and innovation in the real estate development industry by recognizing the best new projects. Post Covid-19, real estate developers are already flagging significant changes to the design of office and residential projects.

In addition to awards for excellence in development, other categories such as Sustainability, Corporate and Social Responsibility, and Marketing will be recognized. There will also be an award for CEO of the year.

Glico Philippines, Inc. announced the launch of the new Pocky Sakura in the Philippines

The Sakura Season is coming to the Philippines with a limited-edition Pocky Sakura offering that experience of authentic taste and fragrance of sakura and creamy chocolate in every bite, giving a feel of Japanese culture.

The limited edition Pocky Sakura, which comes in soft pink inspired by the Japanese sakura flower, is available at major retail outlets and online stores Shopee and LAZADA, from March 1 for a limited time. While stocks last.