Despite the continuing effects of the pandemic, agriculture production improved by 0.7 percent in the third quarter of the year, pushed by growth in crops and fisheries subsectors.

But output for the first nine months fell 0.2 percent. 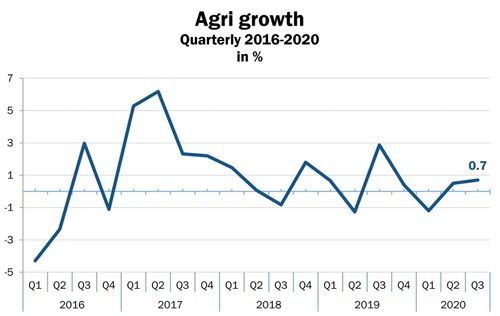 Production in the crops subsector went up by 4.8 percent in the third quarter and contributed 52.7 percent to total agricultural production. At current prices, the subsector grossed P211.1 billion, 2.3 percent higher than last year.

In the first three quarters of 2020, crop production increased by 2.3 percent.

The fisheries subsector improved by 1.9 percent in the third quarter and contributed 15.8 percent to the total agricultural output. At current prices, the subsector grossed P63.4 billion, a 0.9- percent decline compared to last year’s gross earnings for the period.

In the first nine months of 2020, the subsector’s production went up by 0.2 percent.

The livestock subsector which contributed 17.5 percent to total agricultural production, suffered a 7.6 percent contraction in output in the third quarter of 2020. At current prices, gross value of livestock production amounted to P71.4 billion, 1.6 percent lower than last year’s value.

Hog, the sector’s main driver, recorded a 7.7 percent drop in production to 508,910 MT from 551,610 MT. Decreases in outputs were also reported for cattle and carabao.

In the first nine months of the year, the subsector’s gross output declined by 5.5 percent.

The poultry subsector posted a 3.8 -percent drop in output for the quarter, accounting for 14 percent of total agricultural output. Its gross value of output also went down by 4.4 percent to P58.7 billion at current prices.

The sector ended the quarter with output lower by 7.2 percent to 431,770 MT from 465,150 MT. However, all other contributors in the sector — duck, chicken eggs and duck eggs, experienced improved outputs.

In the nine-month period, the subsector recorded a 2.8 percent decline in output.

Agriculture Secretary William Dar said that the positive performance for the quarter, despite the combined effects the pandemic and severe weather conditions, is a “confirmation” the government is “on the right track.”

Dar added the dismal performance of hog and poultry sectors were expected due to the lingering effects of the African swine fever and low demand for poultry products but assured that the agency will continue to “provide needed support and interventions to further increase their productivity and incomes.”