Agriculture production contracted deeper at 3.8 percent in the fourth quarter of 2020 from 0.1 percent the previous quarter, pushing 2020 farm output to a 1.2-percent decline from a 0.7 percent growth in 2019, data from the Philippine Statistics Authority (PSA) yesterday showed.

The country missed the Department of Agriculture’s forecast of 1 percent growth. 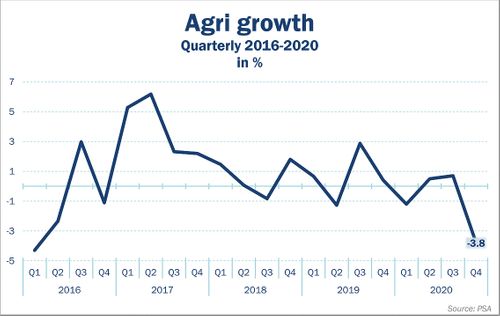 The contraction was due to the combined effects of the Taal volcano eruption, typhoons, the pandemic and the African swine fever (ASF).

DA Secretary William Dar said that the country’s agri sector can still be considered “resilient,” adding the silver lining and big consolation was that the crops sub-sector posted a positive 1.5 percent growth despite a string of strong typhoons that ravaged Luzon and parts of the Visayas.

Dar added the decline in the livestock and poultry subsectors are expected due to the ASF incidence in Central Luzon and low demand of chicken due limited operation of hotels and restaurants.

Dar expressed optimism fisheries can rebound with programs related to aquaculture and mariculture.

Dar added production of rice and corn will further increase to as close to P20 billion.
“We will aim for a 2.5-percent growth this year,” Dar said.

The last quarter of 2020 alone saw seven weather disturbances that caused over P15 billion worth of damage to the agriculture sector.

At current prices, the value of agricultural production for the quarter amounted to P503.8 billion, up by five percent from the previous quarter, and to P1.770 trillion for the entire 2020, higher by three percent from 2019.

The crops subsector which contributed the biggest share in the total agricultural output at 57.9 percent, contracted by 0.4 percent for the quarter as decreases in production were registered in palay, corn, tomato, ampalaya, eggplant, potato and calamansi.

Palay production for the quarter fell by 1.4 percent to 7.39 million metric tons (MT) from the previous quarter’s 7.49 million MT while corn registered a 0.35 percent drop to 1.65 million MT from 1.66 million MT

For the quarter, the subsector also grossed P275.48 billion at current prices, an 8.7 percent increase from the previous year’s earnings of P253.4 billion.

The PSA report showed the livestock subsector which had a 15.4-percent share in the total agricultural output, suffered a 12.9-percent decline during the fourth quarter as hog production continued to be affected by the ASF.

The gross value of livestock output for the fourth quarter amounted to P85.27 billion, a 15 percent increase from 2019’s P74.07 billion.

The fisheries subsector which had a 14.5- percent share in the total agri output, went down by 4.7 percent in the quarter as several fish species recorded output contraction: fimbrated sardines, blue crab, threadfin bream, tiger prawn, tilapia and yellowfin tuna.

For 2020, the subsector posted an almost three percent contraction in value of production at P273.4 billion from P281.65 billion as production decreased by 1.2 percent.

Poultry recorded a 5.5- percent reduction in output for the fourth quarter of 2020 and contributed 12.2 percent to the total agricultural production as weak chicken production pulled down output of duck, duck eggs and chicken eggs.

At current prices, the subsector grossed P69.01 billion for the period, 5.6 percent less than the previous year’s gross receipts of P73.11 billion.

MOU to deter sale of fakes