The government’s expenditures for infrastructure and capital outlays in July fell by 30.4 percent year-on-year, due to a one-time expense made last year and as health and safety protocols led to a gradual implementation of public works amid the pandemic.

Data released by the Department of Budget and Management (DBM) on its website yesterday showed that infrastructure spending for the month amounted to P52.3 billion, lower by P22.9 billion versus the P75.2 billion posted in the same period last year.

“(The decline was) mainly on account of the one-off expenditure in July last year with the advance payment made by the Department of National Defense for the projects under the Revised Armed Forces of the Philippines Modernization Program,” the DBM said. 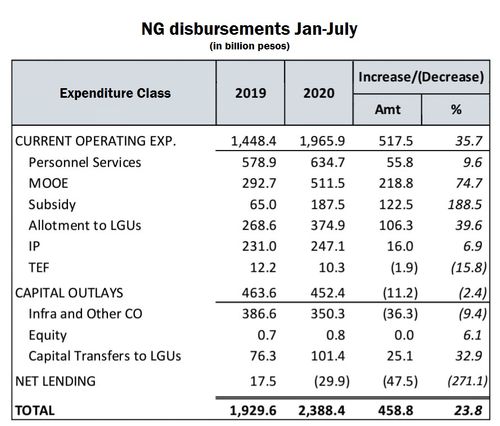 “In addition, disbursements of the Department of Public Works and Highways were lower year-on-year, largely attributed to the gradual implementation of public works amid health and safety protocols in place, as well as the inclement weather in some areas which slowed down infrastructure activities,” it added.

Year-to-date, expenditures for infrastructure amounted to P350.3 billion, 9.4 percent down from the P386.6 billion spent in January to July 2019.

“Infrastructure spending was lower year-on-year due to the base effect of high infrastructure expenditures in the same period last year brought about by the payment of prior years’ accounts payables, and the temporary suspension of public works due to the implementation of the enhanced community quarantine measure in Luzon and other areas nationwide starting mid-March up to late May,” the DBM said.

In July alone, the national government’s total spending amounted to P374.7 billion, up by 10.4 percent year-on-year mainly on account of higher maintenance and other operating expenditures, combined allotment and capital transfers to local government units.

Meanwhile, the DBM also reported in a statement yesterday it has released P3.92 trillion or 95.7 percent of the P4.1 trillion program of appropriations for the first eight months of 2020.

This is substantially higher when compared to the 91.4 percent of allotments released for the same period in 2019, the agency said.

The DBM has yet to release P176.3 billion from the 2020 program for the remainder of the year.

“This will continue to support the operations of the national government including for the roll out of projects and programs that will address the coronavirus disease 2019 pandemic,” the agency said.

“The DBM likewise assures that it will release the necessary budgetary requirements to implement the proposed Bayanihan to Recover as One Act once it is signed into law,” it added.