Around 4.2 million Filipinos were unemployed in February, the Philippine Statistics Authority (PSA) reported yesterday, while those who were working but were still looking for more job opportunities ballooned during the same month amid the coronavirus disease 2019 (COVID-19)-induced health crisis.

According to the PSA’s labor force survey (LFS) for February, the number of unemployed persons rose to 4.2 million, up from four million jobless Filipinos recorded in January 2021.

This translates to an unemployment rate of 8.8 percent, which inched up from the 8.7 percent recorded in the previous month. 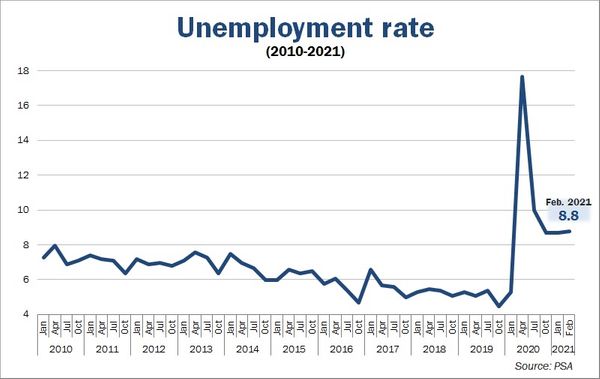 In terms of proportion, the underemployment rate in February 2021 was estimated at 18.2 percent, higher than January’s 16 percent.

Dennis Mapa, national statistician, said in a virtual press briefing yesterday the number of underemployed persons saw a significant increase, particularly in the sectors of wholesale and retail trade, which saw an additional number of underemployed of 268,000; agriculture and forestry, 250,000; other service activities, 192,000; manufacturing, 143,000; and construction, 108,000.

“Most of the respondents cited variable working time, which means less hours at work, and poor business conditions as the top two reasons why there are underemployed,” Mapa said.

In a statement, the country’s economic managers said the increase in underemployment indicates that income is limited due to quarantine restrictions.

Since 1987, the LFS has been conducted on a quarterly basis. However, the LFS is now conducted monthly, starting February 2021, in order for the government to provide more timely statistics to guide urgent and responsive policymaking, especially amid the pandemic.

Meanwhile, the labor force participation rate, or the proportion of the working age population that is either working or actively looking for work, increased from 60.5 percent in January 2021 to 63.5 percent in February 2021.

In nominal terms, this translates to 47.3 million in the labor force, up from the 45.2 million recorded in January. The economic team said the gradual reopening of the economy allowed more people to re-join the labor force.

The number of employed persons also rose by 1.9 million to 43.2 million in February from 41.2 million in January.

“This means we have surpassed our pre-pandemic employment level of 42.6 million in January 2020. Reflecting the sectors of the economy that were opened further, the following sectors showed the most improvement in job creation: services at 1.6 million, of which one million are from wholesale and retail trade, agriculture at 259,000, and industry at 46,000. This trend signals rising economic activity,” acting Socioeconomic Planning Secretary Karl Kendrick Chua, Finance Secretary Carlos Dominguez and Budget Secretary Wendel Avisado said in their joint statement.

The employment rate however inched down to 91.2 percent from 91.3 percent in the previous month.

According to Mapa, the impact of the ongoing enhanced community quarantine (ECQ) in the National Capital Region (NCR) and adjacent provinces will be reflected in the April round of the LFS as the March survey was already done prior to the ECQ.

“If we will base it on the previous ECQ, and even the modified ECQ in August, we saw that the labor force participation rate went down and the unemployment rate went up, so based on the past data, we already saw the impact of the lockdown,” Mapa said.

The economic managers said that over the past year, employment figures showed the sensitivity of the labor market to the level of community quarantines that were imposed to contain the spread of COVID-19.

“Around 8.7 million jobs were lost when we imposed the strictest quarantine from March to May 2020. As we carefully relaxed our restrictions, more jobs were gradually restored and the total number of jobs created since April last year at 9.3 million led to employment exceeding pre-COVID levels in February 2021,” they said.

However, with the sharp increase in the number of COVID-19 cases this month, with daily cases reaching record-highs, the government imposed the ECQ in Metro Manila and in the provinces of Bulacan, Cavite, Laguna and Rizal, collectively called the NCR Plus bubble, from March 29 to April 4.

“This decision was arrived at after a careful analysis of the cost and benefit of the week-long ECQ on the people. We assure the Filipino people that the Duterte administration will not squander this opportunity to slow down the spread of the virus and recalibrate our COVID-19 response strategies,” the economic managers said.

“We will continue to monitor closely and assess the health and economic data as they come in order for us to deliver timely interventions and provide better opportunities for the people, especially the poor, amid this prolonged health crisis,” they added.