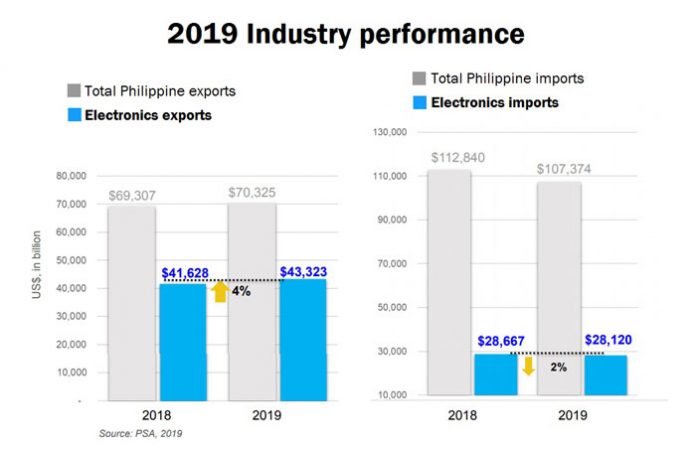 Export revenues of the semiconductor and electronics industries are seen contracting by as much as 26 percent this year, a reversal from an earlier projection of a 5-percent growth.

This is also a more pessimistic outlook of a best-case flat growth that an industry group set exactly a month ago.

In his presentation at a webinar, Dan Lachica, president of the Semiconductor and Electronics Industries of the Philippines Inc. (SEIPI) said the sector also anticipates a 26 percent drop in imports.

Lachica said as it is, the Philippines lost 15 percent of volume and shifted to plants outside the country to diversification of sourcing. This is because multinational companies are avoiding a single-country risk.

“We should develop local materials and we are not quite there yet,” Lachica told the forum hosted by the German-Philippine Chamber of Commerce and Industry.

The revised forecasts will reflect on the performance of the merchandise exports as electronics and semiconductors account for 60 percent of total shipments.

The lockdown in mid-March has crippled the supply chain for SEIPI members. Earlier in the year, operations of Calabarzon-based members were temporarily halted due to the eruption of Taal Volcano.

Lachica said SEIPI hopes to ramp up and recover from pandemic but the country is up against competitors China, the biggest manufacturer of electronics and semiconductors; Vietnam which attracts labor-intensive investments in the sector and Thailand, which gets the capital-intensive projects.

Implementation of some of the components of the roamap of the industry has been derailed but Lachica said the plan is to focus on semiconductor integrated circuitss for smart senros and value -added services for IC design.

The industry exported $43 billion products in 2019, up 4 percent from $41.63 billion in 2018 and accounted for 61 percent of total merchandise exports. As of May, exports have slightly recovered by are still down 14 percent.

Lachica also cited the industry’s economic impact; contributing 22 percent to GDP from the production output, purchase of inputs and distribution of its products.

A P1 billion increase in investments creates about 620 to 1,408 additional quality jobs to the economy.

To date, the industry employs over 3 million direct and indirect workers. (I. Isip)